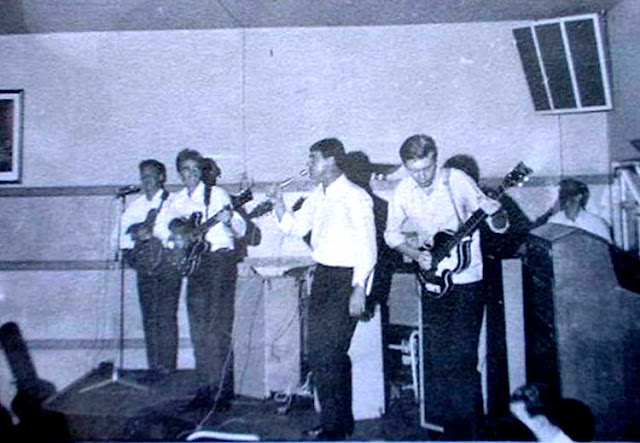 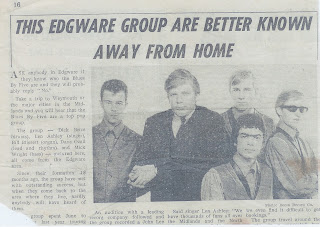 "Blues By Five" sounds like a name the Rolling Stones might've chosen in less imaginative and daring circumstances noted Bruce Eder in his All Music Guide, considering that they may be descended from the "Blues By Six" band that Charlie Watts exited, for a gig with Alexis Korner, in 1961.
They were actually a seperate band from Harrow-on-the-Hill, Middlesex.
The nucleus of Blues by Five was born under the guise of The Men of Mystery all from Belmont School in Harrow, originally put together in 1960 by Ron Faulkner (aka "McQueen") on Lead Guitar, Ken Morgan on Rhythm Guitar, Jim Whitaker on Bass Guitar and Phil Wainman on Drums (1). They were later joined by singer Len Ashley.

The Men of Mystery played around the London area at various clubs, did well working American bases for agent Jack Fallon (Cana Variety), and then Toured Scotland and the North of England.
They backed Marty Wilde and Duffy Power at The Marquee. They supported Joe Brown at The State Kilburn.
On 17 September 1963, they also opened for The Rolling Stones at their local venue South Harrow British Legion Hall where they were later seen by producer Joe Meek and offered a recording test. Singer Len Ashley was offered an opportunity to record Eddie Cochran type numbers but he turned this down to stay with the band (Heinz later took on this role and recorded "Just like Eddie").

By 1963, Ron and Len were then joined by Dick Bryce on drums, Mick Wright on Bass, Bill Blisset on Keyboards and Noel Chartres McManus on Sax (2). This was the Birth of Blues by Five.
From spring to summer '64, they Toured Britain backing American singer Big Dee Irwin ("Swinging on a Star"), starred with The Hollies - Little & Large - Shane Fenton and Screaming Lord Sutch.
David Ozholl (aka Dave Jones) joined the band in summer 1964 on lead and rhythm guitar after Ron dropped out through illness during their tour with Big Dee Irwin.
Early gigs with the new line up included a season at the famous Blackpool north pier, working with Johnny and the Pirates, The Tornados, Heinz, Marty Wilde...
In November 1964, they took part of the Brenda Lee/Manfred Mann UK tour.
They had one single release on Decca in December 1964: the 'A' side was a powerful rendition of John Lee Hooker's R&B classic "Boom Boom", the B side was an original "I Cried" written by Rolling Stones Manager Andrew Loog Oldham and arranger Mike Leander. This is now a sought-after 45.
David Ozholl played lead guitar on the band’s recording of "Boom Boom" [see the press cutting above] (3).

During 1965, they kept touring UK, supporting PJ Proby in April.
By June 1965 they underwent a working tour of Cyprus, Malta and North Africa
entertaining the troops, playing in their own right and backing several others
including Michael Cox,Twinkle and Little and Large.
The Band broke up after supporting The Spencer Davis Group in September
1965.

In the late 60’s / 70’s, Ron and Len formed a new band called Fascination with Terry Williams - Trumpet,Guitar,and Vocals - Ian Williams - Bass Guitar and Vocals - Steve Dunkley - Drums. It was a change in direction for them musically doing more vocal harmonies (Beach Boys etc).
Later the personnel changed bringing in Trevor Goarge - Keyboards,Vocals - Eddie Majwick - Bass Guitar they continued to do college gigs etc and were then joined by John Hamilton - Guitar - Keyboards - Vocals (Later ran EQ Studios)
They were joined briefly by Christopher Rainbow who later had hits with Give me what I cry for and Solid State Brain and also recorded Jingles for Tony Blackburn on Radio One. Later produced various bands Jon Anderson being one.
In the late 1970.s Ron and Len formed a recording band called TAN and released several singles and a Country Album on the White Dove Label. The personnel were Len Ashley - Vocals - Ron Faulkner - Guitar & Bass Guitar - John Hamilton - Keyboard & Backing Vocals - Terry Williams - Trumpet and Backing Vocals - Roger Rettig - Guitar and Pedal Steel Guitar (He was an original on Rutland Weekend TV - The Rutles and played with Fatso and various good country bands.
In 1992, Len Ashley and Ron Faulkner reformed Blues by Five with John Barry (JJ) on Lead Guitar and Vocals, John Abbot on Bass Guitar, Nigel Clegg on Drums. Blues by Five continued to play through the 1990's in Blues clubs and Pubs until they finally split with people going in different directions.
Ron and Len are still together writing and recording their own songs and Jingles when they get together.
Ron is now based in Spain and does the odd gig with local bands. Len joins him on his frequent visits.
Blues by Five Resurected are playing at The Moraira Music Festival in Spain 12th June 2011.
Original members Len Ashley Vocals / Harp and Ron Faulkner Lead Guitar Vocals

(1) Phil Wainman Later went on to join Sandie Shaw & The Paramounts, Johnny B. Great & The Quotations, and then Jimmy Cliff & The Sound System. He inspired Keith Moon, playing on stage with 2 bass drums. He subsequently went on to become a successful record producer, producing Sweet, The Boomtown Rats...

(2) Noel McManus left in late '64. Was he the saxophone player of the same name who
joined Screaming Lord Sutch & the Savages from February 1965 to March 1966???

Special thanks to Len Ashley and David Ozholl
If you have any further information and want to contribute to this site, please email us at: tomusicstorytellers@gmail.com
Publié par Musicstoryteller#15.Aline