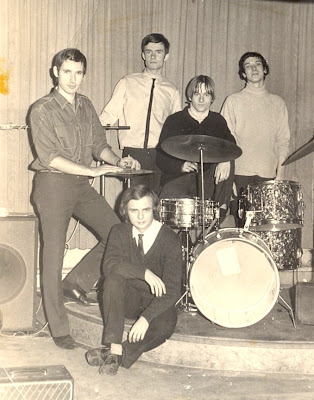 Some Folks were a German short-lived mid 60s Beat combo. They were a continuation of The Echos, formed by multi-instrumentalist Volker Schütte and 3 of his lads, in Lüchow, Northern Germany. During the 3 years they spent together they had a fair bit of success locally, playing regularly various local venues such as Cuxhaven Studio-Tanzbar, Nürnberg Lido-Tanzpalast or Saarbrücken Atlantis-Hit-House, but never released a record.


Their story by Volker Schütte, 2011:
The Echos were founded in Lüchow in August 1964 by Werner Voss on lead guitar, Dieter Burmester on backing vocal and bass, Volkmar Schulze on drums and backing voc, as well as on sax (I played drums, whenever he played sax) and Me, Volker Schütte, on main vocals and rhythm guitar. We played twice (on Saturday and Sunday) almost every weekend until March 1966.

In spring 1965 we won the first prize in a Niedersachsen-contest of beat-bands in Uelzen. Ulf Krüger [of The Resounds] was in the jury!

In March 1966 we turned professional; this means we played for a whole month every night at the same club (2nd half of April 1966: “Studio-Tanzbar” in Cuxhaven, May 1966: “Lido-Tanzpalast” in Nürnberg).
Werner Voss did not want to turn professional with us, so he was replaced by a guy called "Yogi".

After 6 weeks, while playing in Nürnberg, we had a big dispute with Yogi and replaced him by Bruno Frenzel, guitar and backing voc and a guy whose name was Peter “Bonny” Powalla, keyboards and backing vocal. Bruno and Peter just happened to have left another band, while playing in Nürnberg. We met them in mid-May and they played with us on stage on the very same evening after only a few hours of practicing!

In the first half of June 1966 we played at the “Club 99” in Cuxhaven. In the 2nd half we practiced in Lüchow.

Thereafter we played at the “Café Wilhelmshöhe” in Trier, at the “Atlantis-Hit-House” (July 1966), Saarbrücken (1st half of August) and at the “Florida And Atlantic” in Salzgitter (2nd part of August). At that time we changed our name to Some Folks.

In a certain way it was a little bit a kind of a move from “beat” to “soul”, which started to become popular at that time (James Brown etc).


What do they become after?

Dieter Burmester now is a manufacturer of highly priced hifi nowadays and has a video on YouTube: http://www.youtube.com/watch?v=qkacHkMTSa0 and this is his homepage: http://www.burmester.de

Peter “Bonny” Powalla now is the producer of a girl group http://www.banana-mama.de now.

Ulf Krüger worked with Lonnie Donegan & Leinemann in the late 60s and then The Neil Landon Five in the 90s.

Bruno Frenzel later played guitar with Birthcontrol http://fr.wikipedia.org/wiki/Birth_Control and http://www.birth-control.de , and he composed most of their hits. He died in 1983.

Various Line-ups of The Echos & Some Folks