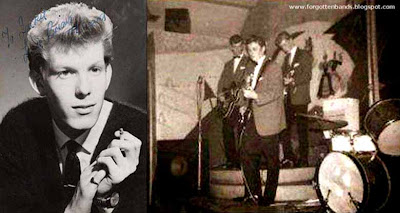 Most notable for including Jeff Beck (1) and recording with Jimmy Page, Brian Howard & The Silhouettes were an English Rock'n'Roll group from Mitcham, in Surrey, put together in late 1960 by lead vocalist and rhythm guitarist Phil Somerville, with red haired lead guitarist George Colbran, bassist Dave Robertson-Hollidge (2), drummer Ian Hague (later with Chris Farlowe and Nice), and a pianist whose name is long forgotten.

By 1961 Somerville moved to “Im & the Uvvers” and was replaced by John Gibb (4), who did look somewhat like Alan Caldwell of Rory Storm & the Hurricanes (Ringo Starr's old band) according to former American GI Charlie Blute (3), then stationed in Fontenet, France, where The group was booked during the summer.
They were indeed booked in the Enlisted Men's Club at Fontenet Ordnance Depot, during the months of July and August 1961. They also had a girl singer who was hired for the tour of Western France.
At the end of summer '61, they returned to England without her. In December 1961, Charlie Blute went to John Gibb's home, in Mitcham, for Christmas as a guest of his parents and they became firm friends...
So he went out to gigs with the band to clubs in Guilford and Epping.

In 1963, The new Silhouettes were Johnny Patto (ex Johnny Kidd and the Pirates) on lead guitar, Phil Childs on bass, and Barry Gilford (who lost his sight to Glaucoma) on drums. On alternative Fridays Brian Howard and the Silhouettes would play in a venue just down the street from Wimbledon Park railway Station (Central line) known as "The Rock and Twist Club" (7).

Brian Howard & The Silhouettes released a pair of singles for Columbia and one on the Fontana label.
The first, 'Somebody Help Me' b/w 'Young And Evil' was released in October '62. The follow-up, 'The Worryin' Kind' b/w 'Come To Me', issued in July 1963, featured Jimmy Page on lead (5). But they were best known for their cover of Chuck Berry's 'Back In The U.S.A.' which was released in April '64 (6).

John Gibb remembers another guitar maestro, Jeff Beck playing with them for a bit (7). Beck did fill in for them but also in the early days as he was in fact an old crony of Phil Somerville’s from his junior art school (1).

In late 1964 they changed the name to The Sneakers and released a 45 which was produced by Shel Talmy, including Ray Davies’ “I Just Can't Go To Sleep” coupled with “Bald Headed Woman.”
They supported The Who at the start of their run of Tuesday nights at the Marquee Club.
By 1965, They recorded a 12-track album at the Marquee Studios as The Frays (8). Their first release for Decca Records was “Walk On” backed with the stunning group original “Keep Me Covered”.
Unfortunately the single failed to chart, the LP remained unreleased so the band called it a day.

John Gibb later went on to live in Ontario, Canada and played in the band Battered Wives (who made some records and one of them went gold in Canada).
He is now living in Canada and owns a metal fabricating company.
His brother Chris played bass with Canadian bands the Deserters and Wanka in the 80's. He now lives in Florida.

Dave Hollidge (real name David Robertson-Hollidge) spent 6 years in the pro music business, went on to live in Spain, then moved to Wales, back to music full time for a few years in 1985. He started his own carpet business and ended up in Canton Cardiff. He started playing again a few years ago with Blues Central...

(1) "Crazy Fingers" by Annette Carson:An irregular contact was vocalist Phil Somerville, an old crony of Jeff Beck’s from his his junior art school. Somerville formed a group, Brian Howard & The Silhouette, and Beck played guitar on a few of their gigs. Later, when Somerville moved to “Im & the Uvvers”, he put the word out for Beck to stand in for their lead guitarist, who had upped and left…

(2) Not to be confused with bassist Dave Elvidge (see the Crescents):
incidentally Jeff Beck's paths have crossed with 2 musicians called Dave Elridge in the same period. The bass player with Brian Howard & The Silhouettes and the drummer of the Nightshift...

Annette Carson's "Crazy Fingers":The Nightshift started playing regurlarly at Eel Pie Island and some of London’s leading club venues like the 100 Club; Phil Somerville recalls they once headlined a bill with opening for them...

(3) Charlie Blute: "I was stationed at Fontenet Ordnance Depot, France which was an Army Base. I was there for 2 1/2 years, from January 1960-May 1962. I was in Special Services and then assigned to CID (Criminal Investigations) as a clerical support specialist. Prior to going into the service. I did some disc jockeying for the local YMCA and did the same for the Army in France, on my free time."
"...I was a GI when I met the guys in the band. They were booked in my EM Club in Fontenet, during the summer of 1961. They stayed there for two months and then returned to England and I had no contact with any of the band until later in December when I went to John's home for Christmas as a guest of his parents... John and I became friends and I became close to his family when they came to France for vacation that year. I had some contact with John's mom for a while until I got settled back in the US.

...Incidentaly Rory Storm & the Hurricanes played the same club the next year! It was then I met Ringo [Starr]... I thought both groups had great potential to go someplace. John and Paul had come to France to see Ringo in order to hire him to join their band. I was present at that meeting. But it was a quiet chat over tea I think...."

(4) Charlie Blute: "I figured out John's old street address in Mitcham, it was Hatfield Close. John did look somewhat like Rory, but he surely did not stutter like Rory did. Gosh when he introduced a number at the club it took longer than the song to say the title. Yet he could sing like a bird. Later learned in my course of studies that stuttering can be helped by breathing like you sing."

(6) Back In The U.S.A. and Hooked were both included on CD Compilation Rare 60's Beat Treasures, Vol. 4, on Beat Im Star Club (Dble LP) and Beat Merchants (Dble LP).


(7) Rob StearnsRe your question Jeff Beck playing with Brian Howard....I can personally confirm this as being true .... I saw him playing with them on several occasions. Some history here...There used to be a venue just down the street from Wimbledon Park railway Station (Central line) known as "The Rock and Twist Club"…
On alternative Fridays Brian Howard and the Silhouettes would play....Being a budding musician myself during the early 60's I stood mesmerized as I watched a very young Jeff Beck bedazzle us with his playing on an old blonde Telecaster through an old Vox AC30, at that time we'd only ever heard those lame old guitar solos by the likes of USA's Bill Haley's (and the comets) lead guitarist... then along comes this young fellow wearing an old black tee shirt and a black leather vest, blistering speed and just a blowing the doors off the place.....magical times indeed.