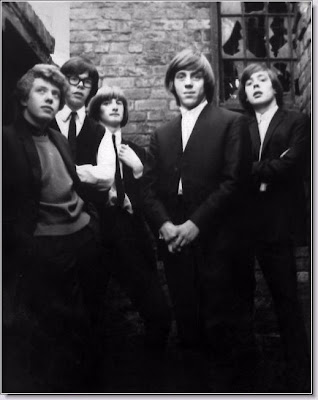 The Prowlers were a Birkenhead-based R&B/Blues group, formed in early 1964, with Alan Davies on Vocals & harmonica; Phil Norman on Lead guitar; Dave Stanton on Rhythm guitar; Ian Macdonald on Bass and Malcom "Mally" Coram on Drums. They travelled all over the country and spent 3 separate months at the Star Palast, Kiel, Germany, in January, April and July 1965.
By the summer of 1965, Dave Stanton and Alan Davies left to be replaced by Peter Wharton (ex-“The Deerstalkers”) and Phil Munro. They then ceased to be full-time musicians but kept the band going on a semi-professional basis and were managed by Max Wilson aka "Mr Trendy", an acquaintance of Wharton's, a very eccentric person.
Dougie Hughes took over from Wharton in 1967.
The Prowlers did not release any records, but made three double-sided demo records including "Cadillac" which was used by Radio Caroline on the adverts it broadcast for Liverpool Cavern Club.
Although They had a fair bit of success locally, playing the Cavern regularly and various local venues, the band was nowhere near as good as the original line-up and finally broke up in late 1967.
Here are Their complete Stories...

"The Prowlers were a five-piece, formed early in 1964 with the idea of playing Chicago style electric blues, rocked up a bit - the sort of the thing the Stones and other bands were doing in their early days. We all lived in Birkenhead and rehearsed in the cellar of the bass-player's house. We started playing around the area in the spring; youth clubs, students' and other dances, clubs like the Kraal, Cubik, Left Bank and even the River Mersey cruise ship, Royal Iris. There were ballrooms including the Tower in New Brighton and the Majestic Birkenhead. We built up a good following and late in the year got the chance to go to Germany. This was an opportunity to become full-time musicians so we went for a month to the Star Palast, Kiel in January '65.

During that month we backed black American singer, Davy Jones, for one night because his band got stuck in the snow coming from Sweden. In 1961 Davy played a gig at the Cavern and was backed by the Beatles before they became famous (see photos below). We also played alongside Goldie and the Gingerbreads who were a very classy American girl band (who later did well in the UK) and alongside Freddie Fingers Lee’s band with Ian Hunter as its bass player. Ian emerged in the 1970s as Mott the Hoople's frontman. He and Freddie got part way through writing a song for us but it didn't get finished. Ian and Freddie shared our apartment for a week or two while their van was being fixed.

When we came back after our first month away we were anxious to find out if our popularity had suffered while we had been away but we played a great show at Birkenhead Technical College Hall to an over-capacity audience (mainly screaming girls) and a lot of people had to be turned away. The local paper published an excellent article.

We had a proper manager/agent by this time and back in the UK we were sent all over the country. We went down particularly well around the Birmingham area, Scotland and Dublin. We opened for Manfred Mann on one occasion in Stirling, playing to a 2000+ audience and the Swinging Blue Jeans a couple of times. Nice guys as I remember. At a local dance we were we supported the Pete Best 4.

Back in Germany in April and July, with a steadily growing following, we were offered recording contracts by both Philips and Polydor (German divisions) but it would have meant staying in Germany long term and we were convinced we were going to become successful in the UK. We opened for Screaming Lord Sutch & the Savages for one week in Kiel.

Back in the UK we still had our strong local following but weren't playing in our home area as often because we were working around the country. Unfortunately our agent was sending us to quite a lot of venues, more like cabaret clubs that weren’t really suitable for our band.

Early in 1966, Dave Stanton and our singer Alan Davies left as things weren't working out as well as we had hoped and we were back doing day jobs. We found replacements but it was never the same although we played the Cavern many times in 1966/67 including a couple of sessions on the day that the Cavern reopened after a short closure on July 23rd 1966. Solomon Burke and Rufus Thomas were on the bill. Prime Minister Harold Wilson was there along with just about everyone else. “Pirate”

Radio Caroline used to use a demo of ours (Cadillac) on the adverts it broadcast for the Cavern. We had a near-miss with Decca who told us that they liked the demo of Cadillac and were going to record us, then they had a change of heart.

I think we played our last gigs sometime in 1967 and by then there was only Ian and me left from the original line-up as Mally had got fed up travelling over from Liverpool (where he now lived) for practice sessions with Alan and Dave's replacements who, we quickly discovered, didn't really share our ambition or musical aims."

"Although extensive searches have been made we were unable to find copies of any of these demos except for our first one Lost & Alone/King Bee which was on tape. It was recorded in mono by a mobile unit in a local club and the technical quality is not good but we had it cleaned up and put onto a CD. Lost & Alone was not like our usual music - it is a pop song deliberately written to be commercial.

Alan Davies (singer) worked as a clerk then joined the British Army in the 1970s. We heard that later he had become a journalist and was living in Denmark. It is not known if he continued with his singing. We would love to get in touch with him if anyone knows his present contact details.


Phil Norman (lead guitarist) spent much of his working life in the public sector (HM Customs & Excise), although he spent some time with an interior design company (he is a trained designer - Liverpool Art College) and had his own design business for 10 years. He is now retired. He joined Ian & Mally in the late 80s/early 90s in a six-piece blues band Out of the Blues which lasted about 4 years. He has a small recording studio at home and produces records (as a hobby)with a singer/partner under the name Upturned Collar. Their recordings get played regularly on local radio.

Dave Stanton (guitarist) was originally a shop display artist and later went into the building industry specialising in joinery. He is now retired.

Ian Macdonald (bass) trained as a joiner and has had his own building firm for many years. Ian has played in numerous local bands since the 60s.

Mally Coram (drums) obtained a music degree and taught music at a Liverpool college. He played in numerous local bands. He emigrated to Australia in 2005, formed a band there and set up a recording studio but died suddenly in February 2008.

Phil, Ian and Dave live within a few miles of each other and are in regular contact."


Line up of the Prowlers