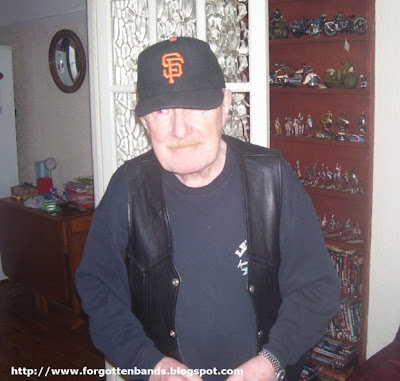 Red-E Lewis - real name William Stubbs - was born in 1936 and was nicknamed "Red" because of his ginger hair [as his son Danny explains "over here we sometimes call ginger people red heads hence the nick name."]

His brother Mickey was in The Blue Rondos and The Syndicats in the 60's, and in a band called Home in the 70's [feat. Laurie Wisefield [Wishbone Ash] and Cliff Williams [AC/DC] and on their first album is a track called "Red E Lewis."

"Band signed to CBS, release first lp in 1970. Titled "Pause for a hoarse horse" was named after the tour van they used which finally had to be replaced. This album features the song "Red E Lewis" with lyrics pertaining to the fact that Micky watched the band rehearsing in my nan's front room. The album was country rock style with most of the songs written about our family.

The second album titled Home,released in 1972 more rock orientated with Cliff Williams playing his bass with a bow cello style on a track called Lady of the birds.

Third album took everybody by surprise as it was a concept album called The Alchemist released in 1973.

Home toured all over Europe and had a good following and actually supported Led Zeppelin. In 1974 CBS wanted the band to go to America to support Al Stewart but my uncle at that time had a wife and small child so he didn't go this basically split the band who did go to America but on their return did split up. As I mentioned Laurie Wisefield [Lead Guitar] went to Wishbone Ash, Mick Cook [drummer] went to the Groundhogs and at some point Cliff joined AC/DC. Their were two part time members of the band Jim Anderson [piano] and Dave Skillern [writer]. Micky had a few publishing deals with various record companies with his best success having Lulu cover one of his songs. Sadly both Micks are now deceased.

All albums now available on cd through Rewind records plus a live BBC sessions cd."