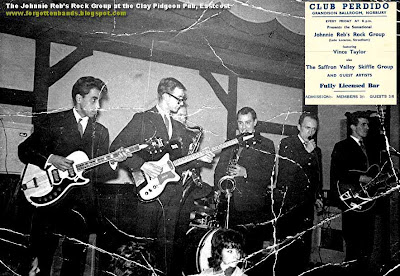 The Johnnie Reb's, named after the national personification of the Southern states in the American Civil War of the 1860s, were formed in 1956 at the Red Lion Pub, North Lambeth, by the Taylor brothers Vince and Barrie, while they joined the resident drummer and pianist, and did skiffle with them.

The first big venue they did after the pub circuit was Streatham Locarno as resident band with skiffle bands filling up the evening (The Karl Denver Trio also did a gig there).

When Rock'n'Roll took over from skiffle, in 1958, their line-up changed: now including Ted Page on lead guitar, an Indian guy named Eddie Bowers on Rhythm guitar, and 2 sax players Charlie Pelling and Willie Garnet.

Incidentally another British Rocker used the stage name Vince Taylor from late 1958 and they had a problem once or twice with an agent but nothing came of it.

As many skiffle bands, they first did the pub circuit.
During 1960, the Johnnie Rebs were the resident band in various venues such as Club Perdido, Grandison ballroom, Norbury on Fridays; at the Clay Pidgeon Pub, Eastcote, on Saturdays; at Kew Boathouse; and at the Southall Community Centre, on Sundays (1). They played there until September of 1962 (2).

They had a manager called Jim Marshall, not to be confused with the inventor of the Marshall amplifier (4).

Barrie Taylor aka "Whip" played bass occasionally for Screaming Lord Sutch & The Savages after they had supported The Johnnie Reb's at the Clay Pidgeon, about July 1960, and as they had no bass player at the time. He also used to freelance at the 2 I's Coffee bar where he often sat in with The Savages (3).


Notes: (1) Barrie Taylor aka "Whip"
"The Johnnie Rebs were the resident band at the Southhall Community Centre, this venue had a lot of big name appearing there. I played with Jerry Lee Lewis there on bass as he didn't have a band only a drummer!!"
"It looks great The first big venue we did after the pub circuit was Streatham Locarno as resident band with skiffle bands filling up the evening. Karl Denver Trio also did a gig there. "

(2) Antion Meredith aka Vic Briggs
"During my teenage years, before I turned pro, if we were not working on a Sunday night, we would be at Southall. They played every Sunday night at the Southall Community Centre. That would be from late 1960 until September of 1962...
They were a band of what seemed like middle aged men in a time when being 25 was very old in the Brit rock world...
They would do whatever was on the charts. Like I remember them doing "You're Sixteen" by Neil Sedaka. They also always
used to play two songs by Charlie Rich, "Lonely Weekends", and the flip side, "Everything I do is Wrong."
The promoter, Peter Lindsey had asked them to make the songs longer - pop songs were all about two and a half minutes in those days - as the guys in the audience had asked him for more time to dance with the girls. So just about every song they did had two full on sax solos; one from Willie and one from Charlie."

(3) Pete Newman:
"We have a bass player at one time called "Whip"... He was in fact Whip Taylor who played with a band called the Johnny Rebs at the same place we did gigs in, The Clay Pigeon Pub, near Harrow. The drummer of that band was none other than the now world famous Jim Marshall inventor of the Marshall amplifier!"

(4) Barrie Taylor aka "Whip"
"We had a manager for a short while whose name was Jim Marshall, not the one of the Amp Fame !! I did know Jim Marshalls son and Pete Fleerackers used to make the cabinets for the amps for the Marshall amps."


Line ups of The Johnnie Reb's:


More on The Johnnie Reb's