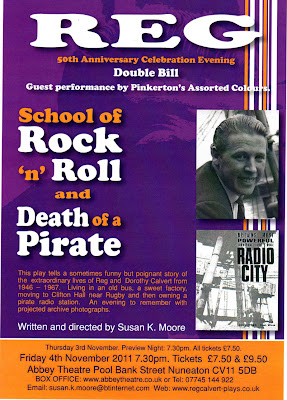 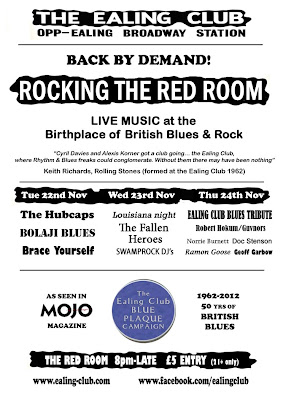 The Ealing Club Blue Plaque Gigs
To raise the final funds for the Ealing Club plaque, we have managed to put together three nights of music, featuring many musicians who realise the importance of the venue and are offering their time and input to help celebrate it.

22nd November:
The Hubcaps - Blues Covers and Original Material, with a very accomplished Harmonica Player at the helm.
The Bolaji Blues Band - Searing Blues Guitar will be on offer from this local band, who are rapidly sealing a reputation for their interpretation, of well known blues classics.
Brace Yourself - Following their brushes with Banksy in their former guise as Exit through the Gift Shop, this band entertained and went down a storm at their last Ealing Club Fringe performance. Guitar covers of 70′s/80′s 90′s and 00 $B!ls classics.

23rd November:
Live music on Wednesday, will have a tinge of Jazz with the band Fallen Heroes, who have already graced the Liverpool Jazz Festival and Ronnie Scotts. Cyril Davies may not have approved of the brass section but maybe Alexis would have given it a go.
The night will be hosted by Swamprock Dj’s Carol Lateman and Nigel Bewley. Sure to be lively, upbeat and of the highest quality. http://thefallenheroes.com/

Please e-mail us to reserve a place on the door, as we will limit the audience to 100 per night.

Please find enclosed a copy of the poster. More details available on the websites:

About The Prowlers
Alan Davies (singer) worked as a clerk then joined the British Army in the 1970s.
We heard that later he had become a journalist and was living in Denmark.
It is not known if he continued with his singing.
We would love to get in touch with him if anyone knows his present contact details.

The League of Gentlemen
Bruce Welsh from Canada is doing some work on a mid 60s British band The League of Gentlemen for his forthcoming encyclopaedya.
If you have info about The League of Gentlemen whose line-up included Jonathan Kent - vocals, Ron Cleave - guitar & vocals, Ron Thomas - rhythm guitar, Jeff Bartley - bass, Joel James - sax, Ray Steadman - drums.
This was a different band from the Bournemouth band, whose original line-up included Gordon Haskell and Robert Fripp. Those one were the backing group for various black US soul stars who toured the UK, released a couple of singles for Columbia and Planet in 1965/6, and played at Manchester Oasis in spring '66.
Please contact us at tomusicstorytellers@gmail.com


Lauren said...
Hiya, i wondered if anyone could help me, i am looking to get in touch with a John Cobb aka Johnny Vance, If anyone has any details of his whereabouts i would be extremely grateful

If you can have information about Brian Howard & his Silhouettes
Please contact us with any further information at: tomusicstorytellers@gmail.com

If you are searching for something on bands of those faraway decades too,
you can also leave a message here or at the bottom of this page


Buddy Britten & The Regents
Alan James about Buddy Britten & The Regents
"I played bass for the Simon Raverne Trio 1968-1969.We toured Europe doing us bases ect. and was resident band at Les Arches in Jersey.I have very fond menories of that time...It would be nice to hear from Simon (Geoff or Eddie Thorpe) or anybody else who knew us or played in the band before or after me"
http://www.forgottenbands.blogspot.com/2009/10/buddy-britten-regents.html


Winston G The Wicked
LEE JONES about Winston G The Wicked
"Hi my old man was the bass player in the fox... I'm not sure what era of the band he falls into but his name is Chris Jones and did record with the band and toured Germany with them. I'm actually trying to find out which recording he is featured on. If anyone could help please contact me." LEE JONES


Saxplayer Ian Thomas
Peter C.Budd would like to get in touch again with saxplayer Ian Thomas who played with Jimmy Duncombe and in Dave DaCostas band in Germany and France.
If anyone knows what happened to Ian, please contact us at tomusicstorytellers@gmail.com 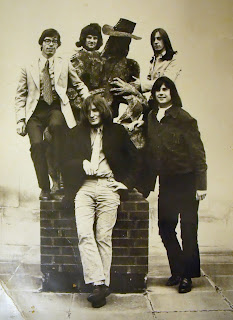 CAN ANYONE HELP?
My Name Is TONY CHARMAN
Back In The 60s I Was The Bass Player In A Band With  CARL DOUGLAS (Kung Fu Fighting) When The Band Ended  I Started
Rehearsals With  A Band  (Please See Picture) I Am Top Right In The Picture
I Can’t Remember The Name Of  The Band Or The Members
Can Any  Body Help ?
If So Please Contact Me
Tony Charman
At  tonys.taunton@hotmail.com
Thank You