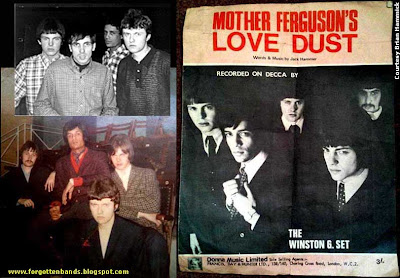 Who’s the mysterious “Mr.G” behind this 60s outfit which released 6 Singles for Parlophone, Decca and CBS labels from 1965 to 1968, credited to The Whip, Fox, The Winston G Set, Winston G & The Wicked or simply Winston G?
His real name was Winston Beresford Gawk or Gork, a suntanned singer with indian roots. Sadly for such a cooly named character, his releases are mostly weak soul-flavoured efforts. In spite of this, Winston G played an important role as a pivotal point in British rock as his material crossed from heavy rock to psychedlia.
His band included, at various times, such great musicians as Tony “Top” Topham, the original lead guitarist with The Yardbirds, Ronnie Harwood who penned “You Drive Me Crazy” for Shakin’Stevens in the early 80s, Peter Beckett later of Player, or Huw Lloyd Langton of Hawkwind and Widowmaker.

Winston G starded out as a solo act, first under the moniker “Johnny Apollo”, and was managed by Robert Stigwood.
In August 1963, he was backed by The New Premiers, a Rock outfit from North London, whose lead singer, Ronnie Harwood switched to bass and then was asked to join “The Ravin Savages” (who had left Screaming Lord Sutch and taken the new name for themselves).
It is highly possible that The New Premiers used the name "The Wickeds" to back Winston at the time...
Shortly thereafter they had broken up with guitar player John Gilbey joining Screaming Lord Sutch’s Savages.

Following the demise of the Raving Savages in late 1963, bass player Ronnie Harwood and lead guitarist Geoff Mew returned to England from Germany and met up with pianist Paul Nicholas and drummer Pete Phillipps who had both just left Screaming Lord Sutch.
They had formed up a new band and were groomed by Michael Black, brother of Don Black, rehearsing at the Astor Club in Berkeley Square in London in early 1964. Harwood got them connected with Winston Gork there. They were initially to be called "Johnny Appollo & the Purple Hearts" but the relationship was not a smooth one and Winston parted company from the quartet. They were subsequently fired by Bertie Green the Boss of the Astor and then became the backing band for Screaming Lord Sutch.

In January 1965, Stigwood put him on the road in a 24-date UK package tour headlined by Chuck Berry. Support acts on that tour also included The Graham Bond Organization with Jack Bruce on bass and Ginger Baker on drums. As they shared the same manager, they backed Winston G on his debut single "Please Don't Say", a Charles Blackwell’s composition, released 3 months later on Parlophone, the same label as The Beatles.

The follow-up, "That Way Too"/ "Until You Were Gone", issued in September 1965, was produced by Stephen Komlosy and credited to Winston G & The Wicked. Indeed Robert Stigwood wanted Winston G to front his own band, and asked former frontman of The New Premiers, Ronnie Harwood to form it.
The first incarnation of The Wicked consisted of 2 ex-Savages, Ronnie Harwood on bass and Brian Hammick on guitar (previously with The Easybeats from Burnt Oak), and Tony McIntyre on drums, formerly with Steve Marriot & the Moments.

In October 1965, Ronnie Harwood returned to the Savages and was replaced with Jeff "Rivens" Watkins.
By 1966, Winston G switched to Decca, which issued his third release, "Cloud Nine", recorded with session musicians (1), enhanced by funky horns, and produced by Les Reed (who had also penned the song with Barry Mason). Sadly this single failed to chart as the previous one did.

In early 1967, the band was renamed "The Winston G Set" with the addition of a piano/organ player nicknamed "Tony Poser".
After the release of "Mother Ferguson's Love Dust"/ "Judge And Jury" in April 1967, original guitar player Brian Hammick left (2) to be replaced first with another ex-Savages, John Bedder then later with Tony “Top” Topham.
Topham, who stayed in the band for a couple of years, had earlier been with The Yardbirds in 1963 (he was actually their original lead guitarist and was replaced with Eric Clapton…).

The Winston G Set, later to be named Fox dabbled with psychedelic rock and their stage act caused some raised eyebrows up and down the country. Bobby Graham produced their next release "Bye Bye Baby", the last one for Decca records, issued in late 67.
By this time a younger bass player called Chris Jones (not related to the Brummie lead guitarist with The Chucks and The Way Of Life) took over from Jeff Rivens. Their schedule took them on a tour of Europe, particurlarly in Germany where they became very popular.
"Hey! Mister Carpenter", released on the CBS label, in April 1968, was a number written by Nicky James with ex-Traffic man, Dave Mason guest-starring on sitar. It’s very poppy with a repetitive chorus and some catchy guitar. The 'B' side, "Seek And You Find" is much heavier.
In late 1968, another band started using the name Fox, so they changed their name to The Whip...

(2) Brian Hammick
"on 'Judge And Jury' close friend Steve Marriott can be heard singing backing and during my solo"
"I left the band due to getting engaged and my then girlfriend (now wife) couldn"t take the attention I used to get from female fans."