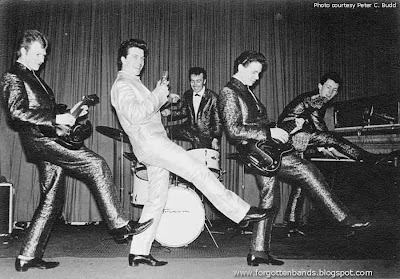 Arthur Champerlain alias "Sonny Stewart" and his professional band "The Dynamos" were very popular first in southern London and then in Western Germany during the early 60's. Their repertoire was the hits of the US charts and some Country and Western, playing Marty Robbins, Bob Luman, The Everly Brothers, Little Richard, Chubby Checker with his famous "Twist again" and The Fly".
The original Dynamoes consisted of guitarist Pat O'Grady, bassist Douggie Reece, pianist Les Smith who was then studying architecture, and drummer Ernie O'Malley. They all met up while working at the 2i's coffee bar in Old Compton Street, Soho. They started playing in the local clubs and the US airbases like Chicksands, Laken Heath, Brise Norton and Bushy Park and performed even on BBC Radio show "Saturday Club" during 1959.
By 1960, Tony Collins replaced O'Grady. At the end of the year, there was some unrest with Sonny Stewart and his management, so it was decided to part company. When Chris Wayne was asked to supported Gene Vincent again in early 1961, he recruited drummer Laurie Jay, from Nero & The Gladiators, and the rest of The Dynamos - apart from Ernie O'Malley (1) - to be his new set of Echoes (who later backed Dusty Springfield from 1963).
Meanwhile Stewart formed another group, recruiting guitarist Jim Duncombe (2) from the Deltones and bass player Frank Jackson formerly with Rodney Ward & the Hi Fi’s. The Dynamos then went off to find other work, first doing some gigs with Eden Cane before finally moving to Hamburg, Germany.

In August 1961, they started an engagement in Hamburg's famous scene club, the Top Ten at Reeperbahn 105, taking over from the Beatles. They played there nonstop daily from 17.00 hrs to 07.00 hrs in the morning.

After a gig in Hanau, Germany, in which Duncombe took over vocals, a local club owner called Aaron Brown supported his intention to found his own band, when finally he left the Dynamos in late 1962.
Peter Budd from The Crestas, an acquaintance of Jackson's, stepped into his shoes (3). They kept playing clubs in Hamburg, but also in Frankfurt and other towns in Germany, France, Belgium, Italy and the Scandinavian countries. They opened up for Bill Haley's band many times at American Bases.
In late 1964, drummer Dave Constable and Peter Budd went with Dave Dacosta & the Strollers.
Sonny Stewart eventually teamed up with the Tony Dangerfield's Thrills and toured Star Club circuit in Germany whilst their singer was in the UK promoting the record "I've seen sutch things."

(1) Ernie O'Malley later played with The Cy Laurie's jazz band, The Blues By Six and then Long John Baldry & The Hoochie Coochie Men

(2) Jim Duncombe
"Jeff beck took my place when I left the Deltones to join “Sonny Stewart & the Dynamos”...
Sonny Stewart and his professional band "The Dynamos" was already popular in southern London when I joined end of 1960. We played in the local clubs and the US airbases and came even as far as Birmingham.
In August 1961 we started an engagement in Hamburg's famous scene club, the Top Ten at Reeperbahn 105, shortly after the Beatles had played there. Certainly hard work as we stepped into their path, playing nonstop daily from 17.00 hrs to 07.00 hrs in the morning. During this time I learned a lot from Tony Sheridan, the club's singer. During a replacement due to illness of both Tony and Sonny, I started singing, too...
During a gig in Hanau, Germany, Aaron Brown, a local club owner, supported my intention to found my own band late 1962, when finally I left Sonny Steward and the Dynamos."

(3) Peter Budd
"One day I got a letter from Frank Jackson, an old friend and bass player who I played with in the “Rodney Ward and the Hi Fi’s” band some time back. The letter was from Germany and asked if I knew a guitarist that would want to replace Jimmy Duncombe who was leaving “Sonny Stewart and the Dynamos”. Jimmy was a great guitarist, and even gave Jeff Beck some lessons at one time. I left for Germany the same week!
I spent a few years with Sonny Stewart, playing clubs in Hamburg, Frankfurt and about every city and town in Germany, France, Belgium, Italy and the Scandinavian countries. One of these clubs was the Star Club - now famous as an early ‘learning’ venue for the Beatles and other (then) ‘undiscovered’ groups... By and large we were treated well, but it was still a good idea to keep an eye on the ‘backstage door’ when the patrons got “good and tanked”!... With Sonny's band we opened up for Bill Haley's band many times at American Basses.
After the stint with Sonny Stewart, Dave Constable and I went with “Dave Dacosta and the Strollers”.

(4) Ron - "The Elf" - Blackie
"I was known as the Elf in Tony Dangerfield & the Thrills!!... whilst Tony was in UK promoting the record 'I've seen sutch things' and we were working in Germany for Sonny Stewart - we were then his Dynamos and played with King Size Taylor too."


Special thanks to Jim Duncombe, Peter Budd, and many others

If you can improve this article by providing further info or corrections ect.
Please contact us: tomusicstorytellers@gmail.com
Publié par Musicstoryteller#15.Aline