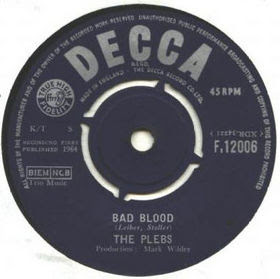 The birth of this mid 60's beat group, named after the word that signified the urban proletariat in Ancient Rome, can be traced back to another two great outfits: The Nashville Teens and The Screaming Lord Sutch's Savages.

Vocalist Terry Crowe and guitarist Michael Dunford had been in The Nashville Teens while
Danny McCulloch and Derek Sirmon were respectively bass player and drummer of The Savages.

Dunford was previously the lead guitarist for The Cruisers Rock Combo, a rock band got together in Weybridge, Surrey, in 1960 with Tony Gallagher, Kenny King and Chris Wing on vocals, John Hawken on piano, Pete Harris on bass, and Dave Maine on drums. They turned into The Nashville Teens in 1962 when they split from their singers and teamed up with Ray Phillips and Arthur Sharp.
The following year, Dunford exited to be replaced by John Allen, and Terry Crow joined during the group's extended stay in Hamburg, West Germany.

Meanwhile Derek "Degsy" Sirmon, an acquaintance of Ritchie Blackmore's, replaced Carlo Little as Savages’ drummer in October 1962,. He had previously played drums with The Conchords, whose line-up included vocalist, Ray Dorset, who was later to form Mungo Jerry, and then Mike Dee & the Jaywalkers, which were both managed by DJ Phil Jay. He brought in The Savages bass player Daniel McCulloch from Frankie Reid & the Casuals, another band managed by Jay.
This new set of Savages finally left Screaming Lord Sutch after a a two week booking at the Star Club in Hamburg in May 1963 and then toured North Germany on their own as "The Raving Savages", from Summer to Winter’ 63.
They recorded an E.P. intitled "Everybody Surf with The Surfing Savages" which was produced by Mike Smith at DECCA. They eventually broke away from their manager Mannfred Woitalla and went back to England before splitting up in late '63.

In early 1964, Derek Sirmon and Danny McCulloch subsequently teamed up with former Nashville Teens members vocalist Terry Crowe and guitarist Mick Dunford to form The Plebs. McCulloch recruited keyboard player Chris Dennis who had put the notice up in a local music shop.
They then went on the road, first providing back up for Joe Meek's protégé, Jess Conrad.
As Mark Wynter' backing band, they supported The Dave Clark Five on their 6-Week UK package Tour from 29 March
to 13 May 1964 along with the Hollies, the Trebletones, the Mojos, and the Kinks.
By June 1964, The Plebs began touring with guest american artists such as bluesmen Jimmy Reed and John Lee Hooker.
The members of the band also spent time win the Orchestra pit with an American Modern Ballet company called The Alvin Ailey Dance Troup in a theatre in London.

Touring on their own, The Plebs opened for the Roadrunners and the Notions at Liverpool Cavern Club on Sunday 21 June 1964.

The band also turned up in the film 'Be My Guest' as Jerry Lee Lewis' backing band, alongside the Nashville Teens.
They actually accompanied "the killer" on his UK tour from November 19th to December 7th 1964, doing Ready Steady Go with him on November 20th 1964.
They also backed Gene vincent, sharing the bill with The Yardbirds at London Golden Green Hippodrome on 1 December 1964 and at Birmingham Town Hall on 12 December 1964.

The Plebs made a single: a cover of a Coasters song called "Bad Blood", composed by Jerry Leiber & Mike Stoller, and the B-side was an RnB-flavoured version of "Babe I'm Gonna Leave You", a folky song they got from Joan Baez, that represented the sound of the band much better according to keyboard player Chris Dennis (1). Both sides were produced by Mark Wildey. They were first released in the UK in late 1964 on Decca, and then in the US on MGM K13320 in 1965. Their sole record has now become a minor collectable.

In January 1965, The Plebs ended up in Hamburg, playing at the Star Club on a one-month contract, which was extended for two weeks. They went there with a new drummer (who was not from the south-east, like the rest of the band).

As Chris Dennis recalls, when their contract there expired, the prospects back in England weren't particularly good and there was a vibrant music scene in Hamburg, so he decided to stay on, playing with a variety of bands such as Lee Curtis & the All Stars, Ronnie Jones & The Blue Jays, and The Bad Boys. The others went home...

Dennis relocated later in Italy, playing with Dave Anthony's Moods, The Rags, I Nomadi and Modena City Ramblers.
Dunford became a key member of the second lineup of Renaissance, and Danny McCulloch worked with Eric Burdon & his New Animals.


(1) Chris Dennis In fact the Plebs were my first band. I had put a notice up in my local music shop and not a week later there was Danny McCulloch standing at my door, inviting me to an audition. This was in 1964. We made a single - a cover of a Coasters song called Bad Blood. But the B-side was a much better song, and represented the sound of the band much better. It was an RnB-flavoured version of Babe I'm Gonna Leave You, a folky song we got from Joan Baez.


Discography of The Plebs