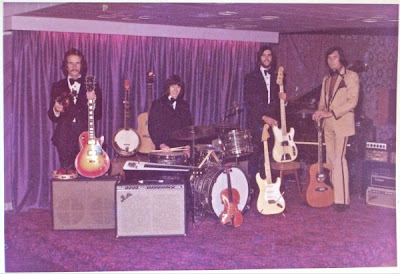 Geoffrey Glover-Wright relocated back to Jersey, fronting The Simon Raverne trio, with Alan James (Rowell) bass, Eddie Thorpe on drums From 1968 to 1969. They were resident band at Les Arches Hotel, Gorey, each winter, and at The Sunset Strip and The Cabin in The Watersplash on Five Mile Road, St. Ouen's, during the summers.

As back-up band for Simon Raverne, They were known by many names: The Sound, Country Sunshine, The Eternal Triangle ... Between gigs with Geoff, Richard, Taffy and Martin played as a trio unto themrselves, and went by the name of 'Cigarette and Burning Boots' at The Deep, St. Helier.

In December 1974, they were contracted to play for 6 months at The Sahara, Dubai, but after 3 months, Geoffrey Glover-Wright quit to manage The Safari club.

He finally ended up returning to Jersey, playing The Watersplash from 1981 till 1994.
Geoff became the Entertainment Manager at the Merton Hotel, St Helier, Jersey.

He still playing there as Simon Raverne & The Star Band featuring the Starlettes...

"Geoff continued to play at the Van Gogh for a few years, and I dropped in from time to time for a beer and a blow! I played with him once more, deputising fro his regular bassist on July 8th 1967, just before he relocated back to Jersey, where he still performs to this day, although the name has been changed slightly to Simon Raverne."

"On July 8th (1967), I stood in for one night with the Simon Raven trio, with Roger 'Solly' Truth back on the drums. It was just like old times, and still a buzz to play with those guys!"

Alan James (Rowell) : "My name is Alan James. I played bass for the Simon Raverne trio 1968-1969. We toured Europe doing us bases ect. and was resident band at Les Arches in jersey. I have very fond menories of that time. Simon showed me how to be not only a musician but how to be a showman. He's influence still helps me run a good show and I thank him for the lessons he gave me."

"I played drums with Geoffrey Glover-Wright for 3 years when he was Simon Raverne in Jersey, CI and Dubai, UAE...

At the time, he was married to a blonde lady named Spring ~ whose family lived in the house that had been the Nazi or Gestapo headquarters during the WW II occupation of Jersey.

Richard Melhuish who played guitar, electric violin, pedal steel and sang back-up vocals auditioned me in England (to replace Roger) where I was playing with Heatwave.
We flew to St. Helier, Jersey to meet Geoff who played guitar, piano and sang and Taffy Edwards who played bass, keyboards and sang. We stayed at Les Arches Hotel, Gorey where we rehearsed and played each winter.

As back-up band for Simon Raverne, we were known by many names: The Sound, Country Sunshine, The Eternal Triangle ... Between gigs with Geoff (as Simon Raverne's band), Richard, Taffy and I played as a trio unto ourselves, we went by the name: 'Cigarette and Burning Boots' at The Deep, St. Helier.

When asked for a name by the manager of The Deep nightclub in St. Helier, Taffy Edwards came up with it on the spur of the moment and it had nothing to do with my fire-eating stunt at the end of most evenings.

We had to wear black suits and bow-ties and would open the show as a trio. Taffy would sing whatever were current hits (Eagles).
One night, just for the fun of it, Taffy and I were dressed in 'drag' by our girlfriends and went on stage without telling Geoff.
Normally, he would not look at us ~ just step up on stage and start playing but when he finally noticed us, he said nothing at all.

During the summers, we played at The Cabin in The Watersplash on Five Mile Road, St. Ouen's (where I used to surf).

We were contracted to play for 6 months at The Sahara, Dubai, but after 3 months, Geoff quit to manage The Safari club.

Simon and the band did no original music whatsoever ~ despite my asking them to.
Simon Raverne's material consisted of old rock 'n' roll (Buddy Holly, Chuck Berry, Jerry Lee Lewis, Elvis Presley), Johnny Cash and Neil Diamond.
The only time Geoff asked me what song I thought would start the audience dancing, I replied, "Superstition by Stevie Wonder" so he learned it and it was always popular.


From Steve Bottomley in Jersey:

'I live on St Catherines Hill, not far from Les Arches (it’s gone now and there’s a “yuppie palace” been built there). Another co-incidence - my Dad was a fan of Simon Raverne (particularly the song, “Me And Bobby McGee”), and in the mid eighties he and Mum often went to see them play.'

"The Simon Raverne Trio used to play at the Cigli Air Force Base NCO Club in Turkey (around 1967). We'd see them every 6-10 weeks and they were great! They always closed the show with their SUPER rendition of Morning Dew."