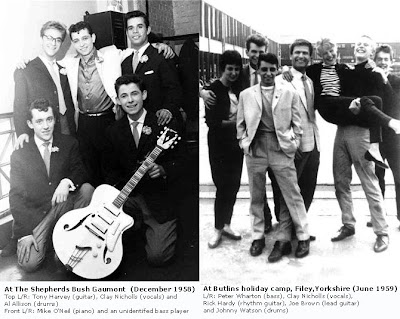 "Clay Nicholls" was a Scottish singer of italian origin, whose proper name was Vincente Tartaglia. He moved to London, found the 2I’s Coffee Bar where he instantly landed a spot singing in late 1958. He therefore formed his first set of Blue Flames there: hiring Tony Harvey on guitar, who had previously been in the original crew of Vince Taylor's Playboys; Mike O'Neill on piano from Leigh, Lancashire, and Al Allison on drums.
Not long before Christmas 1958, they played Shepherds Bush Gaumont where mogul Larry Parnes saw them but was unimpressed. Even though they passed an audition for a season at Butlins holiday camp in Filey,Yorkshire, in the early part of 1959.
Unfortunately, they disbanded because they were a band thrown together because of a requirement for series of bookings, but was never expected to remain together once that requirement was fulfilled.
Tony Harvey returned to the 2I’s Coffee Bar, backing other newcomers such as Keith Kelly or Screaming Lord Sutch with his Egmond guitar.
Mike O'Neill went on to join the 'Cabin Boys', the backing group of Tommy Steele's brother, Colin Hicks. Al Allison was later with The Wild Angels.

In June 1959, Clay Nicholls' manager Alan Humphries decided to assemble another group for the summer season at Butlins Filey. He first recruited guitarist Rick Hardy who had previously been part of the Worriedmen and had just finished a residency at the Top Ten Club newly opened by the Anglo-American rocker Vince Taylor in Berwick Street Soho.

The other members were bass player Peter Wharton and drummer Johnny Watson. They were joined by a very skilled lead guitarist by the name of Joe Brown from The Spacemen Skiffle Group.

When the new set of Blue Flames arrived at Butlins they were met by the entertainments manager who said "You're not the band we auditioned" and had to audition for him again. The latter finally found them better than the other band...

Although before the end of the season, Joe Brown was booked by Larry Parnes and joined his Beat Boys to back Marty Wilde, Billy Fury,Terry Dene, Dickie Pride, Johnny Gentle, Duffy Power and Sally Kelly at The Southend Odeon for the opening night of 'The Big Beat Show'. There TV producer Jack Good remarked him, even found him 'quite sensational' and eventually booked him for his new series, 'Boy Meets Girls', to be unveiled next month.

Meanwhile the Blue Flames replaced him with returning Tony Harvey.
In September 1959, they eventually were paid off. Then Rick Hardy and Peter Wharton both returned to Soho, London, where they worked until being asked by pianist Iain Hines to be part of The Jets, the first English rock band to play in Hamburg. Johnny Watson was poached by Reg Calvert to be the drummer in the new core of Vince Taylor's Playboys.
Tony Harvey later was to play with great success with Vince Taylor again.


Quite a coincidence, 3 months later, another british outfit was also called "The Blue Flames" touring Scotland as Billy Fury's backing group. This band featured a young talented pianist by the name of Clive Powell aka "Georgie Fame", Kenny Packwood (Lead Guitar), Brian Gregg (Bass) and Clem Cattini (Drums). They were actually the second version of The Larry Parnes Beat Boys.

Clem Cattini often related an event that resulted in a change of name for their band: one cold afternoon when they were sat in the group van and had nothing to do, decided to pass the time by lighting one another's farts... As it was a cold day, their wind, when ignited, was blue in colour. As a consequence, from that time onward, they started to call themselves, "The Blue Flames". A name that Georgie Fame obviously liked alot.


Later, in June 1961, Clay Nicholls assembled a new version of "The Blue Flames" including Georgie Fame, Red Reece, Colin Green and Tex Makins. Larry Parnes decided Billy Fury should have his own band to back him in a stable basis.
Billy came to a place where The Blue Flames were rehearsing with Clay and decided he liked the Blueflames because of the initials BF. And so Billy Fury and The Blueflames were born.
Or perhaps the memories of the smell abound in the coach in winter 1959 obviously came back to the nose of Billy...
Eventually Billy Fury's manager sacked The Blue Flames - because they were too Jazzy - and then replaced them with The Tornados in December 1961.

As a result, they became a band of its own in February 1962, with Georgie Fame taking vocals and leadership.
As Georgie Fame & The Blue Flames took up a long residency at The Flamingo Club, London, thanks to Mike O'Neill now leading his own band Nero & the Gladiators.

Lineups Of The Other Blue Flames :