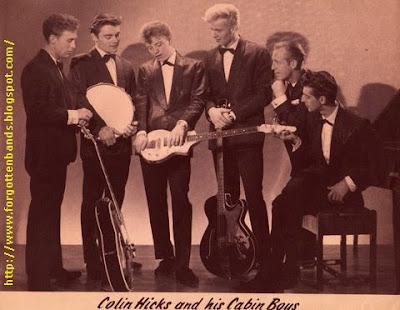 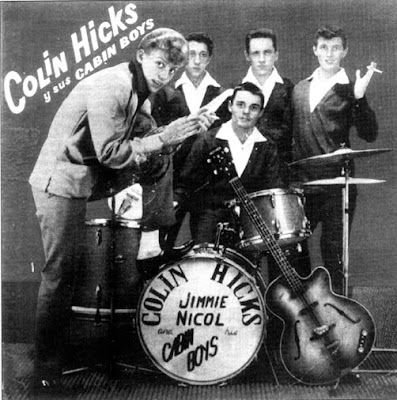 Colin Hicks was the younger brother of British rock'n' roll pioneer Tommy Hicks aka Tommy Steele. However at home, in the UK, the hoped-for success never materialised despite being signed up by the same managers, several top-of-the-bill tours and some TV appearances. He took a lot of stick from Tommy's fans, add to the fact that Colin looked and sounded very much like his elder brother didn't help.

Even his story began almost like a fairy tale. Colin Hicks was born in London in 1941. During Spring 1957, he was still a 16-year-old cabin boy in an oil tanker docked in South Africa. And one day he sang for laughs in a local nightclub.
When he returned to London, Tommy Steele's managers, Larry Parnes and John Kennedy, enjoyed his singing ability and signed him up to sing in a nightclub in London's posh Mayfair district.
He then sang at the 2I's coffee Bar where Bobby Green arranged an audition for his backing group The Cabin Boys.
They recruited Tony Eagleton on lead guitar; Tony Belcher on rhythm guitar; Brian Gregg on bass (from Les Hobeaux Skiffle Group) (1); Ronnie Mills on piano, and Jimmie Nicol on drums, who all used to get up regularly at the 2I's.

As a result, a recording contract with Pye records led to the release of his debut single, "Empty Arm Blues" a song written by his guitar man Tony Eagleton, coupled with "Wild Eyes".

Then followed three TV guest spots and from November to December 1957, a 7 week package tour with Marty Wilde, beginning in Sunderland and finishing in London. They both headlined at the old Finsbury Park Empire on 9 December 1957.

Colin's second 45 "La Dee Dah"/"Wasteland" came in early 1958.
By february 1958, Colin Hicks and Marty Wilde roped in as replacements for Terry Dene during a package tour with Chas McDevitt and Edna Savage, after a gig at Gloucester Regal.
Soon after, Tony Belcher went on to join Rory Blackwell's Blackjacks then later Marty Wilde's Wildcats. He was replaced with saxophone player Johnny Stanley.

In April 1958, Larry Parnes sent Colin Hicks & His Cabin Boys to play 2 one-night stands at the Thurso Town Hall and the Boys' Brigade Hall in Wick, Scotland. They appeared there under the Alan Martin Enterprises banner. In Thurso some dancegoers fresh from the pubs proved somewhat disrespectful to their distinguished guest, jeering, scoffing and dishing out a selection of ribald sarcasms... Colin Hicks then saw out his set and left the Hall. A few weeks later an article appeared in a national magazine in which he advised his fellow practitioners to avoid, at all costs, a miserable place called Thurso, where the locals were utterly ignorant of what constituted good music.

Shortly thereafter Colin Hicks went back to South Africa this time with his Cabin Boys, then he was booked on a package tour of Italy with the Platters, Ramblin’ Jack Elliott and the Trio Raisner which started on 7 May 1958: headlining in Milan, Venice, Bari, Brindisi, Naples, Rome, Genoa.

But in June 1958, Colin Hicks returned to London to find that Larry Parnes and John Kennedy didn’t want to extend his contract after “Lah Dee Dah” had failed. They then confiscated the gear of the band.
So Hicks attracted the patronage of an insurance broker and a wealthy businessman named Freddy Clifford, who spent £2000 on the very finest instruments, amplifiers, microphones and a mixer, and getting Colin publicized in his own right.

In August 1958, after a successful appearance on the popular TV show "Jack-In-The-Box", another tour followed, and 'Pye' had Colin Hicks' third 45 released: "Little Boy Blue" written by lionel Bart coupled with "Jambalaya" the Hank Williams song.

Towards the end of the year, Colin Hicks was starring at the Granada in Kensington London, with a show called "The Colin Hicks Band Show", which also included Johnny Duncan & his Blue Grass Boys, Nancy Whiskey and The Southlanders. The Cabin Boys were supplemented by guitarist Joe Moretti who's just arrived in London directly from Scotland. Brian Pugh aka "Lou Bryan" took over from Ronnie Mills on piano for a very short while before moving with Moretti to Vince Taylor & his Playboys. He reinvented himself as “Perry Ford” and would later become successful with the Vocal trio The Ivy League, after a stint in the Echoes, and as songwriter (2).
He was replaced with Chris Andrews who joined the Colin Hicks one nighter tour of North Britain starting at Whitehaven, Scotland. Johnny Stanley eventually left to front his own Show Band which was part of the support acts alongside Sibby Raid and The Debonairs from mid December 1958 (3).

Colin Hicks & The Cabin Boys rehearsed in the first floor of the Roundhouse - for 2 days - until Freddy Clifford blew a fuse. Every record company had shown him the door. So the band folded.

During February 1959, Colin Hicks took over the lead role of Bongo Herbert vacated by James Kenny in the hit musical stage production of "Expresso Bongo" and underwent a 13 week tour across the country.
Meanwhile Tony Eagleton and Jimmy Nicol were rolled by Alex Murray into the pit band of the Franck Norman/Lionel Bart musical “Fings ain’t wot they used to be”, which opened at the Theatre Royal in Stratford, East London.
Chris Andrews started a solo career, appearing on Jack Good's TV show "Oh Boy". He later became a successful singer, songwriter and producer (4).

Without chart success, his recording career in the UK nosedived but Colin Hicks was not deterred.
In September 1959, Colin Hicks checked out the latest arrivals at the 2is coffee Bar and recruited a new set of Cabin Boys: Dave 'Zom' Tick on guitar (ex-Vipers), Rod 'Boots' Slade on bass, and Mike O’Neill on piano (ex-Clay Nicholls & The Blue Flames). Jimmy Nicol, the original drummer, provided a thread of continuity.
They accompanied Hicks for 4 months work in Italy, where they had rave reviews about their rock'n'roll show through a Cameo in the Italian financed and directed documentary movie “Europa di Notte” (Europe By Night).
Colin Hicks & The Cabin Boys recorded 9 songs for the Italian Broadway label: "Book Of Love", "Yea Yea", "Oh Boy", "Twenty Flight Rock", "Tutti Frutti", "Sexy Rock", "Johnny B. Goode", "Giddy-Up-A-Ding-Dong" and "Brand New Cadillac" which was the first to be released as a 45 single.
In the Alessandro Blasetti film, Colin Hicks and his group appeared singing "Giddy Up A Ding Dong", which had proved to be a big hit in Italy, resulting in a lucrative invitation to tour there. In fact They had a balls sporadic gigs, but regular wages; met and hung out with Chet Baker.

In late 1959, Jimmy Nicol left to join Vince Eager and his Quiet Three (5). Laurie Jay from The Nu-Notes replaced him.
At this time, The Cabin Boys always opened the show just before Colin.
Probably inspired by the surrounding scenery and the Italian "Peplum" movies, The Cabin Boys decided to change their name to Nero & the Gladiators, backstage at the "Teatro Olympia" in Milan. They then parted company with Colin Hicks who choose concentrate on Italy.
When Johnny Kidd & The Pirates topped the British charts with "Shakin' All Over" in Summer 1960, Hicks modelled his act on them. Incidentally The Pirates' bass player was none other than a former Cabin Boy, Brian Gregg.

Colin Hicks even appeared in the film "Vacane alla baia d'argento" in 1961 which ensured his popularity and success over there. So Brian Gregg returned to the fold in Summer 1961, rolling his mates from Johnny Kidd & The Pirates, guitarist Alan Caddy and drummer Clem Cattini into The Cabin Boys. They were plunged straight into a six-week tour of Italy and once their obligation had been completed returned home, exhausted, eventually working with Joe Meek as part of The Tornados.

A couple of years later, in May 1963, Colin Hicks signed up a new English backup band to accompany him on a another tour of Italy: The Shel Carson Combo consisting of Norman Shapiro and Johnny Charlton on guitars, Bobby Posner on Bass, Mike Shepstone on drums.
They played in places like the Alcione theatre in Milano, earning success among the audience.

When Colin Hicks got sick and completely lost his voice before a show in Torino, The Cabin Boys replaced him, performing more of their songs, in the rhythm & blues vein. They decided to tour on their own and then changed their name to The Rokes. During a gig at the Ambra-Jovinelli in Rome, they were spotted and then signed by Teddy Reno, the manager of the Italian girl singer Rita Pavone, to support her Italian tour...

Colin Hicks carried on with various line-ups of The Cabin Boys. One of them featured Jamaican Tenor saxophonist Mike Elliott who later formed the Foundations in 1967.


(1) Brian Gregg had purchased a cello Hofner. He was one of the few bass players in Britain to own an electric bass guitar.

(2) Brian Pugh reinvented himself as “Perry Ford”, being part of The Ivy League from 1964 to 1966, and writing for Adam Faith and The Bachelors.
(3) Brian Gregg: “we were playing these big ballrooms up north - places like Barrow and Crewe… to get an audience of a dozen. It was obvious that it wasn’t going to happen and I quit. He was a cocky little git at times, though he knew it all. Wouldn’t even consult us.”

(4) Chris Andrews had an international hit with "I'm Yesterday Man" in 1965.
He also wrote for Adam Faith ("The First Time"; "Hungry for love") and produced Sandy Shaw.
(5) Jimmy Nicol later did session work with the orchestras of Oscar Rabin, Cyril Stapleton, Johnny Dankworth and Ted Heath from 1960 to 1963, before leading his own bands, The Shubdubs and The Sound of Jimmy Nicol. He also played drums for other acts such as Georgie Fame & The Blue Flames in May 1964, and the Swedish guitar group The Spotnicks from September 1965. Being a very accomplished session drummer from Liverpool, he was naturally chosen to sit in with The Beatles during their tours of Denmark, Sweden, Holland and Australia, for a couple of weeks in June 1964, while Ringo Starr was hospitalised with tonsillitis.
It was rumoured that Nicol had died at 49 years old in 1988 (René van Haarlem from Beatles Unlimited), however a report by the Daily Mail (Saturday, October 1, 2005) confirmed that he was still alive and living as a recluse in London. Check this page about him.


If you have any further information and want to contribute to this site, please email us at: tomusicstorytellers@gmail.com