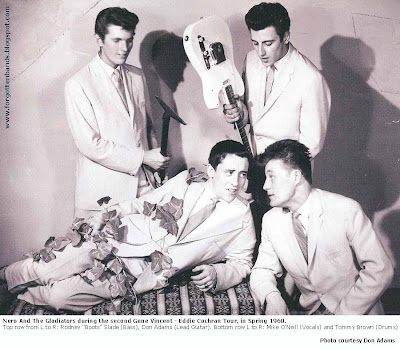 Nero & the Gladiators were an instrumental band led by keyboardist Mike O'Neill for more than 3 decades.
They actually evolved out of another British band called The Cabin Boys who were touring in Italy, backing Tommy Steele's brother Colin Hicks.

Mike O'Neill hitch-hiked from Leigh, Lancashire, to London, where he was instantly hired-first by Clay Nicholls in late 1958, and then Vince Taylor in Summer 1959. He then lived in a madhouse flat at 39 Old Compton Street in Soho, London.

In September 1959, he was recruited by Colin Hicks as pianist of his backing group The Cabin Boys along with Dave 'Zom' Tick on guitar, Rod 'Boots' Slade on bass, and Jimmy Nicol, the original drummer.
They accompanied Hicks for 4 months work in Italy, where they had rave reviews about their rock'n'roll show through a Cameo in the Italian financed and directed documentary movie “Europa di Notte” (Europe By Night).
In the Alessandro Blasetti film, Colin Hicks and his group appeared singing "Giddy Up A Ding Dong", which had proved to be a big hit in Italy, resulting in a lucrative invitation to tour there.

In late 1959, Jimmy Nicol left to join Vince Eager and his Quiet Three (1). Laurie Joseph Jacobson aka "Laurie Jay" from a Tottenham-based band called The Nu-Notes replaced him.
At this time, The Cabin Boys always opened the show just before Colin.
Probably inspired by the surrounding scenery and the Italian "Peplum" movies, The Cabin Boys decided to change their name to Nero & the Gladiators, backstage at the "Teatro Olympia" in Milan. They then parted company with Colin Hicks who choose concentrate on Italy.

Upon their return to England in January 1960, O'Neill and 'Boots' Slade got a publishing deal-and spent the advance on an echo unit (Binson echo chamber), which gave the New band their “Italian sound” - as advertised on the posters when they were supporting Gene Vincent and Eddie Cochran. On the same bill was another Leigh lad Georgie Fame, who moved into Mike’s flat when he was in Italy. Georgie Fame introduced them to Colin Green who was then the lead guitarist with Billy Fury's backing musicians the 'Beat Boys'.

O'Neill originally recruited Green to play guitar on their debut single, “Entry Of The Gladiators”, a dramatic instrumental recorded at IBC studios. It was released on Decca only in March 1961, reaching #39 in the British 45 rpm single charts, and later became the Leigh Rugby club's official hymn.

At that time, their manager was Joe Roncoroni and they were on contract with the George Cooper Organisation which handled the bookings (2).
Shortly thereafter they’d abandonned their resplendent orange suits in favour of roman legion’s outfits - Helmets, breast plates, boots, swords, shields... - formerly used in the movie "Quo Vadis", with Mike O'Neill out front in toga and laurel-leaf crown like a roman emperor (remaining the craziest, who enjoyed circus games and The Gladiators: Nero?) (3).

The follow up, also released on Decca in June 1961, was a rock version of the Edvard Grieg's classic, "In The Hall Of The Mountain King", and featured the guitar work of Joe Moretti (4). Unfortunately BBC Banned it because it differed from the original, and it only reached #48 in the British charts... (5)

After recording their third offering "Czardas" (which missed the charts), Colin Green moved off in May 1961 to take care of what he presumably saw as a more secure future with the Beat Boys who would become the Blue Flames first backing Billy Fury then later Georgie Fame. The Gladiators then went through about 30 guitarists (7): e.g. Don Adams, Keith Charles, Buddy Monroe, Diz Disley, John Urquhart from Aberdeen, Tony Harvey from Vince Taylor’s Playboys to whom he returned after only a few months...

Laurie Jay (8), who was also drumming for The Echoes at the same time, left to front his own band The Laurie Jay Combo, and was replaced with Tommy Brown, previously with Chas McDevitt and Johnny Duncan & His Blue Grass Boys. Tommy Frost (later with The Echoes and Georgie Fame & The Blue Flames) depped when Brown broke ribs in a car crash.

Joe Moretti also spent for about six months on the road with the band (9-10) until the heavy winter of 1962 (11), after a short stint with Georgie Fame & The Blue Flames and before joining Jet Harris & Tony Meehan.
After a gig as supporting band to the Beatles at Liverpool Cavern Club (12) towards the end of September 1962, Boots Slade left to join the Georgie Fame & The Blue Flames too, who offered a more secure future as resident group in The Flamingo Club. Incidentally it was Mike O'Neill who recommended Georgie Fame to the Flamingo's manager, Rick Gunnell.

By the end of 1962, Moretti and Slade were replaced with 18-year-old Mick Jones from Surrey (13), and Jim Cannon.
They went to France with the Gladiators who were happy to accept an offer from Vince Taylor there, backing one of their pop stars, Dick Rivers. Unfortunately, Mick Jones succumbed to the charms of Dick’s girlfriend Marie-Claire and was fired...

Jones and Cannon were in turn replaced with Ralph Danks and Alan Bugby, who were both touring the Continent with Johnny Taylor & The Strangers. After seeing the Beatles at Paris Olympia (14), France, in early 1964, The Gladiators decided to call it a day.

Tommy Brown stayed in France, and then reunited with Mick Jones not only playing but also composing for Sylvie Vartan and Johnny Halliday.
Mick Jones eventually returned to the UK and struck platinum with Foreigner in the 70's and 80's.

Colin Green later became musical director for Shirley Bassey.
"Boots" Slade became a member of The Alan Price Set in 1965. He died in May 2013 in Spain.
Joe Moretti passed away in 2012.

Following the demise of The Gladiators, Mike O'Neil returned to England and played in numerous bands, including The John Barry Seven; Tony Colton & The Crawdaddies; The Division Two first backing The Ivy League and then The Flowerpot Men (15); The Echoes backing Dusty Springfield; The Jimi Hendrix Band (16); The Poet & The One Man Band; Heads, Hands & Feet; 20th Century Crox ect. before reforming The Gladiators from 1991 to 2005. He eventually reunited with several musicians of the 60's in The "Pioneers Of Rock 'N' Roll" such as Big Jim Sullivan, Frank Farley, or Brian Gregg, keep on rocking...
Sadly Mike O'Neill died on 10 October 2013 of liver cancer.

· (2) Barry Edwards
"For our first gig at the Cali, I recall two stages one at each end of the large auditorium. Nero & his boys (Nero & the Gladiators) were at one end whilst we (Barry Edwards & the Semitones) were at the other. Lance Fortune starred. All three acts were on sole contract with the George Cooper Organisation at that time.
The amazing Colin Green was on lead guitar for Nero's Gladiators that first night with "Boots" Slade on bass guitar - he later moved over to Georgie Fame's Blue Flames (also with the George Cooper Org.)..."

· (3) Joe Moretti
"You had to get your band noticed in any way possible and Mike O'Neil told me that in the first instance he had somehow managed to acquire some Gladiator uniforms from Elstree studios after the filming of "Ben Hur" or "Quo Vadis" or some such epic. Helmets, breast plates, swords, shields..."

· (4) Joe Moretti
"I first met Mike O'Neil around 1960. At the 2 I's I believe. And He was on the tour I did with Gene Vincent around 1960. Colin Green was the Original guitarist with the Gladiators and you can hear his fine perfomance on "Czardas"..."

· (5) Joe Moretti
"Unfortunately " Hall of the Mountain King" met with the same fate as "Cadillac" - no air play. This was a composition by the Classical composer, Greig, and that was a no-no then. You just didn't get air play if your version differed from the original."

· (6) The photo above was taken during the second Gene Vincent - Eddie Cochran Tour, in Spring 1960.
"The pink suits were provided by Bernard Bresslaw of "You Need Feet," fame. They were delivered to Brighton by special carrier, from London. They made it just in time for the first house, where the Glads. were backing him on the show. A very nice a cordial man... The Gladiators were booked to back Eddie and the Beat Boys were to back Gene. Unfortunately Eddie Cochran was killed and the Gladiators went on to back Jerry Keller and perform in their own featured spot." (Don Adams)

· (7) Mike Larcombe
"I was also one of the '30' guitarists who played on tour with Nero & the Gladiators in 1961. I have a photo of the group playing a double with Johnny Kidd and the Pirates at a club opening in Stretham. I have lived in Cape Town for the past 45 years"

· (8) between jobs with The Gladiators, Laurie Jay joined the Shadows for a few weeks, touring Wales and Scandinavia, when Tony Meehan complained of stomach pains in early 1960.

· (9) Joe Moretti
"The band wagon was named Brutus and just getting into it was like entering a war zone. The guys never cleaned the wagon out, so the crap on the floor was about a foot deep.
After one gig in Brighton we managed to "accidentally" load about 30 metres of curtain material into the truck along with our equipment.
A lot of personnel changes followed and the group managed to record only one further single, 'Tovaritch' which no longer credited 'Nero' in the roll call."

· (10) Joe Moretti
"I cut one more record with Nero called " Bleak House " by Ken Jones, a very accomplished composer / arranger for Movies
The line up for the recording was : Mike O'Neil - Piano. "Boots" Slade - Bass. Tommy Brown - Drums , and myself on guitar. Boots also did the announcement over the introduction."

· (11) Joe Moretti
"One unforgettable time was during the Heavy winter of 1962, we had played at Manchester and we got stuck in the snow on the way home..."

· (13) Mick Jones
"Nero was a guy called Mike O'Neill. He's still around, I think, playing piano. I haven't seen him for some time. I was approximately the 24th guitarist the band had had. While we were in France, we broke up."

· (14) In mid January 1964, the Beatles played Paris Olympia as supporting band to Sylvie Vartan whose lead guitarist was none other than Mick Jones.

· (15) Mike O'Neill, who was part of Southern Music studios house team, became a prolific session man and his organ can be heard on many tunes of that era: e.g. “Funny How Love Can Be” and “Tossing & Turning” by The Ivy League; "Let's Go To San Francisco" by The Flowerpot Men; Donovan's "Wear your love like heaven" ect.

· (16) In September 1966, as Mitch Mitchell and Kevin Lang recalled, The Jimi Hendrix Experience was originally planed to be a quartet including Mike O'Neill on organ:

Mitch Mitchell
"I went down to this little basement strip club in Soho and there was Jimi with a Fender Stratocaster upside-down with a kind of fake London Fog raincoat on, with his wild hair, and Noel Redding, who had been playing with Jimi I think for a couple of days, playing bass. I think there was a keyboard player from Nero and the Gladiators. That was the idea first off, to maybe have a keyboard player."

Kevin Lang"... when I knew Mitch he was Jimi's drummer, previous to that they borrowed a guy from Nero and the Gladiators... he played when I auditioned with Hendrix for the bassist's job which I turned down..."


Lineups of Nero & The Gladiators