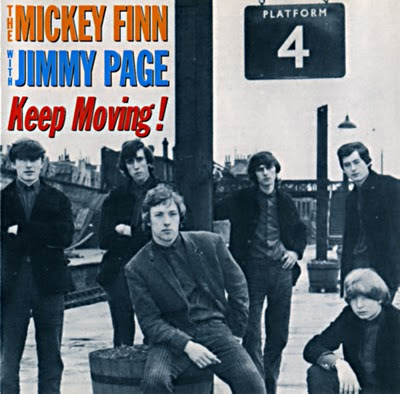 This band, which was named after the lead guitarist, Micky Waller aka "Mickey Finn", evolved out of a Shadows-like instrumental band called The Strangers, put together in Bethnal Green, East London, in Summer 1961 with Bevis Belmour rhythm guitar, Mick Stannard on bass, and Richard Brand on drums. The following year, they became a much more R&B-oriented group and enlisted vocalist Harry Bates.
By 1963, Waller and Brand left to form a more 'mod' sound band while the remainder of the group carried on as The Mates with a new drummer called Albert Smith.
In fact, they were both bitten by the Jamaican Blue Beat bug whilst hanging out at the Crypt Club, Aldgate, and then decided to concentrate on this music.
They therefore formed a new band, recruiting John Cooke aka "Fluff" on Keyboards, John Burkitt on bass and Alan Marks on vocals. After having heard about a drummer of the same name, with Cyril Davis & His R&B All Stars, Waller changed his surname to Finn. They called themselve "Mickey Finn & The Blue Men" and their agent, Don White, secured them a recording contract with Blue Beat records which released their debut single including a rendition of Elias & The Zig-Zag Jive Flutes "Tom Hark" coupled with "Please Love Me", composed by Alan Hawkshaw of Emile Ford & the Checkmates, in January 1964.
They would have recorded on Casey Jones & The Engineers single "One Way Ticket" b/w "I'm Gonna Love"...
After a couple of months, they switched to Oriole, and began recording with Jimmy Page on harmonica, after meeting him at Hackney Club 59.
The follow up, covering Bo Diddley's "Pills" and Jimmy Reed's "Hush Hush" (not to confuse with Bo Diddley's "Hush Your Mouth" as credited on its sleeve), was released in March 1964, which was banned after the police had discovered some purple hearts stashed in Mickey Waller's amp during a raid on The Scene Club.
Mid 1964, ex-Stranger, Mick Stannard replaced Burkitt on bass, and they became known as simply "The Mickey Finn".
Their final 45 for Oriole was a Chuck Berry number Reelin' And Rockin', but failed to chart though it was tipped as a hit on "Juke Box Jury".

Through their new manager, Chris Radmall, they got a deal with Columbia, and began recording with producer Shel Talmy in 1965: "This Sporting Life" (a smash hit for Ian Whicomb in US) /"Night Comes Down".Their 5th single, "I Do Love You"/"If I Had You Baby" was produced by Cy Paine and released in July 1966 on Polydor
The Mickey Finn spent the summer of 1967 in Southern France, where they had a residency at the Voom Voom Club, St-Tropez.Their most well known song was probably "Garden Of My Mind", with its Jimi Hendrix-influenced growling bass and pounding guitar work.They decided to call it a day in 1971, with Micky Waller and John Cooke going on to The Heavy Metal Kids (penning "Hangin' on" and "Kind Woman", 1974).


As The Mickey Finn