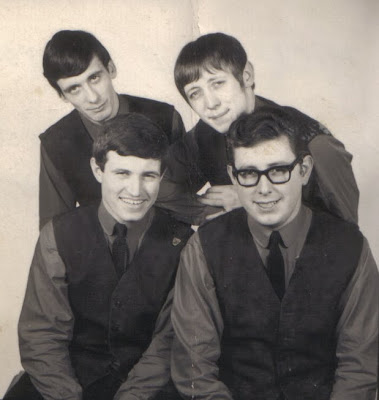 Based upon the hit song-writing duo of John Carter and Ken Lewis, this group, that only cut 7 singles between 1961 and 1964, enjoy something like minor cult status nowadays, as musicians like Jimmy Page (Led Zeppelin), Big Jim Sullivan, Lome Green, Bobbie Graham, and Viv Prince (Pretty Things) passed through their ranks.

John "Carter" Shakespeare (born on October 20th 1942) and Kenneth "Lewis" Hawker (born on December 3rd 1942) were both from Birmingham. Shakespeare formed a skiffle group while still at school in South Heath, and taught himself acoustic guitar. By 1958, Hawker joined him in his local skiffle band and they both began songwriting, inspired by Buddy Holly and the Everly Brothers.
In 1959 both came down to London with a burning self-belief in their talent and were signed initially to music publisher Noel Gay in London's Tin Pan Alley, then to peermusic as exclusive songwriters. They were offered a deal by manager Terry Kennedy (who had previously fronted his own band, The Rock’n’Rollers and had been guitarist for Terry Dene's Dene Aces). He re-christened them "Carter & Lewis". They began singing as a vocal duo, demo-ing songs for other writers, doing backing vocals and even duplicating the latest pop hits of the day for Embassy and Cannon labels.
They had developed a close harmony style similar to that adopted by the Everly Brothers. When Kennedy drafted over to Southern music at 5 Denmark Street in 1961, they went with him.
In summer 1961, they began recording in small studios, backed by the Outlaws and first cut two singles for Piccadily, engineered by Joe Meek: "So Much In Love"/"Back On The Scene" and "Here's Hoping"/"Poor Joe".
By 1962, they switched to Ember label, and released "Two Timing Baby"/ "Will It Happen To Me" and "Tell Me"/ "Broken Heart".
They were soon established as a popular radio team, appearing on BBC Light Programme shows Saturday Club from February 1962. They gradually began to augment their line-up with various musicians who backed them on these radio dates, including ex-Rock’n’Rollers, Ron Prentiss on Double Bass, and ex-Outlaws, Lome Green on guitar and Bobbie Graham on drums, at which point they evolved into Carter-Lewis & the "Southerners" after Southern music.
The group became a vehicle for publishing the songs that stemmed from the Carter-Lewis partnership: they wrote and demo-ed "Sweet And Tender Romance" which was recorded by John Leyton...
Their own version was issued on Oriole, coupled with Who Told You? which was covered by Freddie Starr and many more.
They had first tasted success with "Will I What", a summer 62 top 20 hit for Mike Sarne, which featured Billie Davis and was co-writed, in fact, together with another friend, Bill Bates.


“That’s What I Want” became a top 30 hit for the Marauders, the next summer and featured the latest arrival in the Southerners: Jimmy Page on guitar, replacing Lome Green (1).

Incidentally Carter-Lewis & the Southerners notched up a Top 20 hit in late 1963 with a song called "Your Momma's Out Of Town" by another top writer of the time, Mitch Murray. With a new bass player, Rod Clark, and a new drummer Viv Prince, they performed for the BBC's "Easy Beat" and toured with Duane Eddy, Gene Vincent and The Shirelles.

In late 1963, Rupert Ross from the Flintstones took over from Rod Clark (who later replaced Clint Warwick in the Moody Blues). As Jimmy Page quit the road to bury himself in studio work, Ross drafted in ex-Downbeats Micky Keene.
Bobby Graham returned to the fold when Prince left to join the Pretty Things.
On 15 February 1964, Carter-Lewis & the Southerners had a guest spot on the Beatles' BBC radio show (Saturday Club #280). In March 1964, "Skinny Minnie"/"Easy To Cry".
Whilst they were touring Holland, Rupert Ross died of cancer on May 29, 1964, and was replaced with Dave Wintour.

The band split in summer 1964, when both Carter and Lewis decided to concentrate on writing and doing sessions. Several would become hits: “It is True” for Brenda Lee; “Big Bad Bass” for Jet Harris; “How Can I Tell Her” for the Fourmosts; “Can’t You Hear My Heartbeats”, which was basically written for Goldie & The Gingerbreads, and became a million selling Us #2 for Herman’s Hermits...
They eventually became a trio with the addition of Brian Pugh aka "Perry Ford", who’d been pianist for Vince Taylor & his Playboys, Colin Hicks & The Cabin Boys, and the Echoes, and recorded with George Martin, under the moniker "Lou Bryan" in the 50s.
They called themselves "The Ivy League", and romped on to great success with "Funny How Love Can Be", “That’s Why I’m Crying”, and "Tossing And Turning"...

Bobby Graham also concentrated on studio work, and was to become a prolific session man like Jimmy Page.
Micky Keene and Dave Wintour joined The Tony Colton’s Crawdaddies before moving to The Ivy League backing band, the Division Two.

In 1966, John Carter and Ken Lewis formed The Ministry Of Sound with the cream of Southern Music studios house team.
By the summer of 1967, they recorded a song they wrote to articulate the sentiments of the flower-power movement and entitled "Let's Go To San Francisco" under the artist name 'Flowerpot Men'...

Their songwriting partnership continued to bring success, with further hits by other artists, including "Semi-detached Suburban Mr James" for Manfred Mann, "Sunday For Tea" by Peter & Gordon, "Peekaboo" for The New Vaudeville Band, "Sleepy Joe", "My Sentimental Friend" and "Sunshine Girl" for The Herman's Hermits, and "Little Bit O' Soul" by the Music Explosion which became a US million-seller in 1967.

John Carter wrote the 1970 British Eurovision entry "Knock, Knock, who's There" for Mary Hopkin, which came second, and was another worldwide success. He produced the UK hit "Beach Baby" for First Class in 1974.
In the mid-eighties, he founded his own independent Sunny Records label.
From the nineties, he served on the Council of the British Academy of Composers and songwriters and the council as a writer-member of the Performing Right Society.

Meanwhile Ken Lewis moved over to working with peermusic in an A & R capacity, before retiring from the music business due to ill health and devoting his energies to charity work in Cambridge.