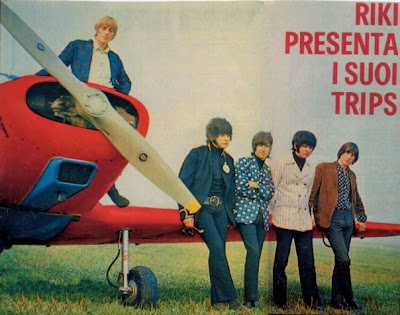 A Trip to Milan

Enrico (Riki) Maiocchi (1940-2004) was one of the most talented singer in Italy in the Sixties; founder and leader of "I Camaleonti" a band formed in Milan in 1965. In the Summer of the following year Riki leaves the band and gone to London in search of musicians for his new own project. He meets Scouser drummer Ian Broad (1), previously member of various groups - Rory Storm & The Hurricanes, The Seniors and The Bigs, an English combo relocated in Italy during 1965-66.
Broad suggested Riki to hire a talented guitarist named Ritchie Blackmore, who at this moment plays with Neil Christian & The Crusaders; and he brings also his bass player in the Crusaders: Arvid "Wegg" Andersen. To complete the new group they needs a rhythm guitarist and their choice was Billy Gray, previously member of Scottish band The Anteeks and, for a short time, in the Buzz with David Bowie. When they came to Italy in September of 1966 someone referred to this experience like "A trip to Milan" so the new name for the band was found.
After only few weeks Maiocchi decided to goes solo and the band continued with Ian Broad as drummer and lead singer. In December Ritchie Blackmore quits to come back in London (rejoining Screaming Lord Sutch, of course later he founded the Deep Purple) and the remaining trio - Ian, Billy and Wegg - hired an Italian keyboardist named Joe Vescovi (from Savona) who became the leader of the Trip.

When Broad was sacked from the group in Autumn they found a new drummer in Pino Sinnone, from Turin and The Trip continued his history as a progressive band in the Seventies.

A Trip in the Seventies
The Trip is going on, releasing their debut single, “Bolero Blues”, originally lined up to be included into the Piper club compilation in 1969, then their first homonymous album on RCA label, the following year. This album was considered as “impressionist music”: their music sounded like a mix of beat vibes and progressive sessions of singular instruments. Although it was recorded in Italy and destined to the Italian market, the lyrics were in English apart from the song “Una pietra colorata” (“A coloured stone”) previously entitled “Take Me” and penned by Pino Sinnone.
They then picked to compose “Fantasia/Travelin’ soul”, the soundtrack of an italian film “ Third channel-adventure in Montecarlo” directed by Giulio Paradisi.

Their second LP “Charon”, that came out in 1971, was thought to be a “concept album” dedicated to Charon, Dante’s Inferno mythologic ferryman. It included some progressive hard rock music such as “Two brothers” and a tribute ballad to Jimi Hendrix “L’ultima ora e ode a Jimi Hendrix”.But after its release, Billy Gray, who went on to publish a solo blues album, and Sinnone quit the band. As a result,the band kept on as a trio with new drummer, Furio Chirico from Turin, who'd earlier been with rock groups I Ragazzi del Sole and Martò e i Judas in the 60's.
Their 3dr album “Atlantis”, which was dedicated to Atlantis, the mythologic continent, is now regarded as their magnum opus. The map of Atlantis on the cover was drawn by the Up & Down Studios. The very first copies of this album it was comprised a band’s advertising interview.

By 1973, they switched to Trident. After their 4th and last album "Time of change", Furio Chirico left to form Arti & Mestieri, Andersen and Vescovi tried to revive the band with the help of Osage Tribe's drummer Nunzio Favia.
But in 1974, Andersen had a serious car accident that caused him a paralysis for a long timethe and the band split.
Joe Vescovi briefly joined Acqua Fragile at the end of 1974 and later both he and Favia joined Dik Dik.
Ritchie Blackmore, whom he had briefly met in 1972 through Arvid Andersen (2), invited him to sessions for the Rainbow album "On Stage 507" in LA and to replace keyboards player Tony Carey in November 1976.

More than 30 years after their demise, they are starting playing again together in 2010.

(1) Arvid Andersen:
"Ian Broad showed up in London after touring Spain & Italy in a band called The Biss. Ian contacted Ritchie saying there was a stack of work in Italy… I went over to the Blackmore’s flat in Holloway Road… Only problem was Jimmy Evans. We couldn’t go with 2 drummers… So we settled with Jimmy because we thought we would be back in 6 weeks… we were due for a month’s residency in a club on the Adriatic… "

(2) Arvid Andersen:
“Ritchie called me about the organist’s job he was trying to fill. He had heard Joe on one of our records… I told him he was shit hot and arranged for Joe to make a tape with some of demos we had written and played on together as the start of the new album we were preparing before my enforced repatriation from Italy …”


· Lineups of The Trip

Special thanks to Luca Mathmos and Daniele Nuti