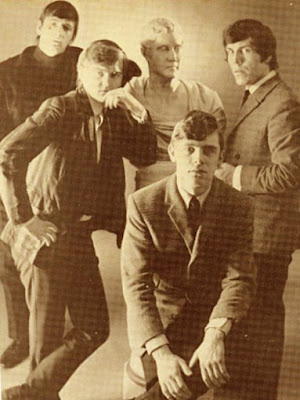 Actor Paul Nicholas, born Paul Beuselinck in 1945, began his career as pop singer and pianist. As "Paul Dean", he fronted various Rock'n'Roll bands between 1960 and 1966: Paul Dean & The Dreamers, Paul Dean & The Soul Savages, and Paul Dean & The Thoughts. Those 3 bands comprised the same nucleus: Nicholas on vocals, Stuart Taylor on guitar and Pete Phillipps on drums. Those 3 musicians started out in a North London based outfit called Gene White & The Phantoms in the late 50s then were brought all together into the Savages to back Screaming Lord Sutch in summer '63.
While Stuart Taylor was poached in the Tornados by his mate Ray Randall, previously bass player with The Phantoms and The Dreamers, Nicholas and Phillipps first reunited in The Jury backing Jacky Lynton then in the Michael Black’s backing group (Michael was Don Black’s brother) based at the Astor Club in Berkeley Square, London. Both returned to The Savages in May '64 and helped Screaming Lord Sutch out to launch his own pirate radio station "Radio Sutch". As pianist of The Savages, not only Nicholas sang lead during the opening set before Dave Sutch came on stage, but he was also dressed as prostitute during "Jack the Ripper"... ending up covered with blood. That’s how he had been often injuried [1] and hence his another moniker "Paul Redman." That was his first taste of acting. Shortly thereafter he decided to give up playing full-time in favor of studying drama and developing his acting skills and then took the opportunity to begin a career as a solo act in early '65. This is the official version.
In fact, when Screaming Lord Sutch recruited a "shit hot trio" consisting of Ritchie Blackmore on guitar, Arvid Andersen on bass and Jim "Tornado" on drums - all three from Neil Christian & The Crusaders - he sacked his existing band.
Fortunatly at the same time, The Tornados first folded. As a result, Paul Nicholas and Pete Phillipps reunited with Stuart Taylor to become Paul Dean & The Soul Savages. They were joined by bass player Harry Reynolds who'd earlier been with The Premiers, an early 60s outfit first fronted by Ronnie Harwood then Paul Nicholas. They were lined up not only to support but also to back American acts Del Shannon and the Shangri Las on their British tour during March '65 alondside Herman's Hermits and The Mindbenders.
They made an appearance in the episode of ITV "Thank Your Lucky Star" aired on Saturday 29th May 1965 along with The Who (performing "Anyway Anyhow Anywhere"). The previous episode featured Screaming Lord Sutch and his new set of Savages which consisted of Ritchie Blackmore and his 2 mates plus the 4 Saxes including ex-Dreamer Ashton "Toots" Tootell.

They released a couple of singles between March 1965 and March 1966. They first recorded a rendition of “You Don't Own Me” under the name of "The Thoughts" (not to confuse with the Liverpool band of the same name which recorded “All Night Stand” in 1966 [2]) for Decca records. A year later, they released original songs "She Can Build A Mountain"/"A Day Gone By" on Reaction label. According to the Record Collector Rare Record Price Guide, this single first appeared on Polydor in late 1964, and is thought to have remained unreleased.
“A Day Gone By” was penned by Ronnie Harwood who was bass player with The Savages at that time. It was one of his first serious composition.

In April 1966, Paul Dean & The Soul Savages supported The Who on their British package tour promoted by Robert Stigwood, along with The Spencer Davis Group, The Merseys & the Fruit Eating Bears, Jimmy Cliff & The Sound System, Hamilton & The Hamilton Movement and The Band Of Angels (Mike d'Abo).

While Pete Phillipps joined up with Ronnie Harwood and Screaming Lord Sutch [3] for a tour of Italy in summer 1966, Nicholas reinvented himself as “Oscar”, after his father, Oscar Beuselinck, a music business lawyer whose clients included The Who, and kept supporting them in Blackpool or Great Yarmouth, backed by The Stuart Taylor Trio.
He then recorded novelties produced by Robert Stigwood such as "Club of Lights", self-penned "Waking Up", a Pete Townshend composition untitled "Join My Gang" and “Over The Wall We Go” written by David Bowie.

A promotional device used by the record company was a cartoon Oscar 'statuette' (presumably a likeness of the singer), which allowed the Reaction label to issue advertisements alluding to the Hollywood Oscars: "Reaction now award you... Oscar - Club of Light."

But it was "Over The Wall We Go" that brought notoriety to Oscar in February 1967 by attracting some publicity through its controversial lyrics about escaped prisoners and incompetent cops. The chorus was "Over the wall we go, all coppers are 'nanas'." David Bowie, who wrote the song, even sang on one line of it. To promote it, Oscar appeared on TV in a prisoner's uniform and it was aided by Radio City's Ian McRae, who started a spoof spot called 'Breakaway Club'. Despite some strong material Oscar failed to achieve a breakthrough.
Stuart Taylor and "Toots" Tootell, who both passed through the ranks of The Echoes (backing Dusty Springfield then Lulu), later reunited with Paul Nicholas in The London Cast of Production Hair from 1968 to 1970 in which the latter played Claude. He maintained a connection with The Who, playing the sadistic Cousin Kevin in Stigwood's film version of 'Tommy' alondside Roger Daltrey and Elton John in 1975.
Notes:
[1] Tamworth Herald 01/11/63 newspaper cutting: FANTASTIC - that was the runaway verdict of a poll taken on Monday night after Screaming Lord Sutch had brought the house down at Tamworth's Assembly Rooms... The Savages consists of Paul Redman on piano - he played with one hand because he had hurt his shoulder two days earlier...

Paul Nicholas: Me and my money - 6 February 2008
"In 1963, I earned £5 a night as one of Screaming Lord Sutch's savages. I had peroxide hair, dressed up in leopardskin and played the piano. He used to pretend to be Jack the Ripper and I had to dress up in dodgy wigs and frocks as one of the victims.
But then he started pelting me with real animal hearts and ruined my dresses, which was a bit too far. But it was great training for my career: some actors have the RSC, I had Screaming Lord Sutch."

[2] The Thoughts from Liverpool consisted of Pete Beckett (Rhythm Guitar), Phil Broadman (Lead Guitar), Alan Hornby (Bass) and Dave Croft (Drums). They began life backing Liverpool acts like Tiffany (from The Liverbirds) and Johnny & John. They recorded a Ray Davies composition “All Night Stand” which was produced by Shel Talmy.
"All Night Stand"/"Memory Of Your Love" (Planet PLF 118, 1966)

[3] According to Pete Phillipps and Ronnie Harwood, they were both reunited with Paul Nicholas and guitarist “Pussy” Mew to back Screaming Lord Sutch at various times between Mid '65 and Mid '66: e.g. when he stood for the National Teenage Party against British Prime Minister Harold Wilson during the General election, in Huyton, on 30 March 1966, and at a Festival in the castle of Provins, France along with The Yardbirds The Small Faces and Simon & Garfunkel on 27 June 1966 (broadcasted on French ORTF TV programme "Music Hall de France").

Line-ups of Paul Dean & The Dreamers, The Soul Savages and The Thoughts