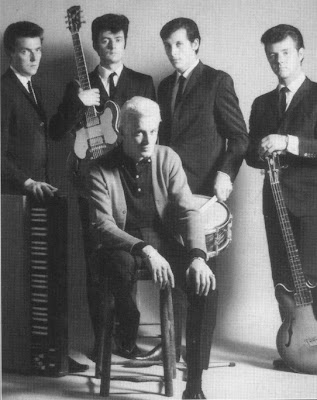 Henry George Schwartz aka "Heinz Burt" was born in Hargen Germany on July 24th 1942, to a German Father and English Mother. His family moved to England in 1945 and settled in Eastleigh, near Southampton.

In the late 1950's guitarist Graham Medley had been teaching him to play from scratch as he was hoping to join the backing group of local climbing stars The Nevitt Brothers. Heinz then formed a 'skiffle' group with him and pianist Norman Hale who'd earlier been with the Whirlwinds and worked as a lorry driver, distributing paint along the entire west coast and was stacking paint buckets onto shelves as a day time job.They called themselves The Stormers then The Falcons after the Falcon Square address in Eastleigh. They used to play pubs and usually wearing bedroom slippers as Al Kirtley recalls (see Dave Anthony). By 1960, they concentrated on American Rock 'n' Roll and Heinz apparently owned one of the first Fender bass guitars and bought by one of his girlfriends Jan who later married Ricky Storm. A 17 year old Pete Hunt replaced their original drummer Stan Hickman.

In Summer 1961, they had an audition for producer Joe Meek but had problems in getting up to London with all the gear by train and tube! Arrived in his studio, at 304 Holloway Road, North London, but rather late 7pm so told to go away. They persisted and eventually recorded some tracks but never released. Joe Meek immediately became infatuated with Heinz and he was the only one member of the band he booked.
In August 1961 Heinz was first lined up to join The Outlaws (Joe Meek’s in-house backing band) on bass - Chas Hodges was going to take over on lead guitar. As Hodges wanted to know what the new bass player was like (meaning as a musician) Meek replied, "Well, he's tall, quite good looking and very smart!" A week later, Hodges finally decided to come back to the bass and Heinz was slotted into a new Meek project, as bassist with The Tornados, a new house band to back his protégés, Don Charles and John Leyton.
Joe Meek was clearly obsessed with Heinz and advised him to dress distinctly from the rest of the band and to dye his hair blonde like the strange children in a science fiction movie. Reg Calvert, who was a trained hairdresser turned agent/manager, was required to do it.

In early 1962, The Tornados became the backing band for Billy Fury, replacing The Blue Flames who were too jazzy. As Fury wanted a keyboardist instead of saxophonists, Heinz rolled his mate Norman Hale into the band.
However Hale was quickly replaced by Roger Jackson.
After the failure of their debut single, “Love And Fury”, The Tornados followed with “Telstar”, which topped the charts on both sides of the Atlantic at the end of 62. It was a hit in 17 Countries worldwide and eventually sold five million copies.
In spite of this, Heinz was groomed for solo stardom by Joe Meek and then embarked on a solo career in early 1963. He was first due to star in the film ‘Farewell Performance’. Ironically, it was Chas Hodges who deputized for Heinz immediately after he left The Tornados and The Outlaws became his first backing band with Ritchie Blackmore on Lead Guitar. They had a summer season together with Arthur Askey in Rhyl after a British tour alongside Gene Vincent and Jerry Lee Lewis from May 6th to June 2nd. Heinz solo live shows were not a great success, especially on this tour in which he had a tough time from the mostly male audiences, some of whom threw “Heinz” baked beans at him.
Part of The Outlaws' management deal with Heinz included the financing of their new stage clothing, van and equipment and Blackmore got his red Gibson ES 335. He used it on Heinz’ second single, the Eddie Cochran tribute "Just like Eddie" which hit the British Top Five in September 63.

In the event, The Outlaws supported Heinz on his early discs (on Decca records) while The Saints – who originally worked with Andy Cavall as support act during the Tour headlining Jerry Lee Lewis and Gene Vincent - were requiered to back him on a series of package and variety shows. Put together by Tab Martin on bass (who replaced Heinz in the Tornados), Roy Philips on guitar and drummer Ricky Winters (ex-Cliff Bennett’s Rebel Rousers), this instrumental trio was named by Joe Meek and acted as house band on many of his recordings. They also released records in their own right. In February 1964, Heinz & the Saints took part of a Larry Parnes package tour alongwith Johnny Kidd & the Pirates and Joe Brown & his Bruvvers, then supported the Rollingstones during their 3rd British tour the following month.
Heinz appeared in 1963's "Live It Up", a film produced and directed by Lance Comfort about four Post Office workers who decide to form a band and record a demo. He performed two tracks including the title number with his band including David Hemmings as lead guitarist and Steve Marriott on drums. The movie revolves around the tape being lost and, after a series of madcap adventures, the tape is found again. The music was produced by Joe Meek.
In April 1964, Heinz moved to EMI Columbia with a new backing band,The Wild Ones, again with Ritchie Blackmore on lead guitar.
Heinz & the Wild Ones made their Live debut on Sunday May 10th 1964 at the inaugural night of the Beat City Club, Soho. The name changed to Wild Boys came in July when they discovered that another group with the same name recording for Fontana had just released a single “Bowie Man”. By this time Brian Woods replaced John Anderson on bass.

They were booked on a Christmas Pantomime season “Once Upon A Fairytale” starring Marty & Joyce Wilde and Lulu, planned to run from December 26th 1964 to January 23th 1965. However the show ended earlier, after the last show at Norwich on January 9th, the rest of performances were cancelled due to poor tickets sales and Ritchie Blackmore left the Wild Boys in February, to join Neil Christian & The Crusaders.
Barry Tomlinson took over him.

For 3 years, from mid 63 to mid 66, Heinz had released 11 other singles first on Decca then on Columbia, and scored 4 Top 50 hits, with "Country Boy" (#26), "You Were There" (#26), "Questions I Can't Answer" (#39) and "Diggin' My Potatoes" (#49). His final release "Movin’ In"/"I’m Not A Bad Guy" failed to chart and the group broke up going their own separate ways in late 66.
Heinz's recording career effectively came to an end with the death of Joe Meek. In fact, Meek blasted his landlady to death with a shotgun belonging to Heinz and then turn it on himself in February 1967. Later in the year, Heinz toured Devon and Cornwall backed by The Gass Company from South Ockenden, Essex.
Heinz carried on with a few live shows and various bands, culminating in a very successful show on the 1972 Wembley Show of Rock and Roll Legends alongside Bill Halley, Jerry Lee Lewis, Chuck Berry, Little Richard and Screaming Lord Sutch…

By 1975, Heinz re-united with former Tornados, and they released a new version of “Telstar”. However another band from Southend used the same name and were actually gigging in Accrington at the same time: they were the backing band of Billy Fury who owned the rights to the name. Heinz then descended into cabaret work.

Later discs flopped and Heinz just faded back into obscurity living back in Eastleigh, eventually working at the nearby Ford factory.
His alcohol problems added to failing health and Heinz had been ill for about a decade since being diagnosed with motor neurone disease and was confined to a wheelchair. He appeared on 3rd February 1999 in London at a Joe Meek Appreciation Society gig alongside fellow former Joe Meek recording artist Screaming Lord Sutch.
His most recent press coverage was over a dispute with neighbours which almost went to court over the volume of the music he was listening to in his home in Southampton.
Aged 57, he died of a stroke on 7th April 2000, just a few weeks after his final sets at the Banister Ballroom in the Hulse Road Social Club, in Hampshire, and then at Bishops Waltham Club, near Southampton (according to Carol Smith), on 24th March, where he bravely managed a few great classic songs such as “Three Steps To Heaven”, “Whole Lotta Shakin' Goin' On”, and his biggest solo hit, “Just Like Eddie”. 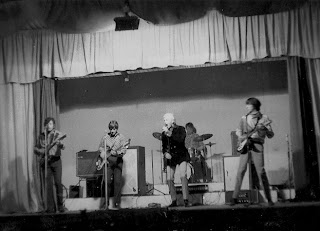 Special thanks to Graham Medley, Carol Smith, Malvin Van Gelderen and many others...
If you have any further information and want to contribute to this site, please email us at: tomusicstorytellers@gmail.com