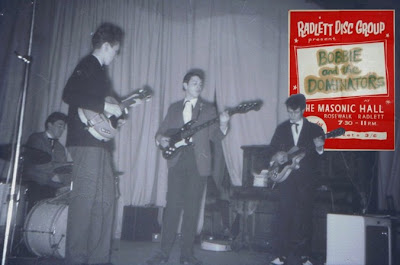 In Summer 1958, Mingay eventually moved to The Satellites and would later join Screaming Lord Sutch & his Savages. His replacement was a 14 year old Ritchie Blackmore (later of Deep Purple and Rainbow) who went to a different school and had earlier been with the 2 I's Coffee Bar Junior Skiffle Group, playing the Dog Box. He actually attended with them a national skiffle competition at the 2I's. Legendary Big Jim Sullivan teached him to play guitar. Blackmore and another fellow school pal Bob Danks on guitar were drafted in the band and recommended by Alan Dunklin who lived two doors away from Blackmore in Ash Grove, Heston. Incidentally when Roger Mingay went to audition for the Savages in May 1961, Ritchie Blackmore was among the other guitarists who applied for the post but Mingay was deemed more experienced and got the job. Ritchie Blackmore would eventually undertake several stints with Screaming Lord Sutch between October 1962 and May 1967.
His real introduction to playing live in front of an audience as well as his first "paying"gig was at Twickenham Kings Head on the eve of Christmas 1958.* About that time he was an aircraft radio technician at London Airport.
Blackmore first owned an Hofner Club 50 then purchased a cherry red Gibson ES835 guitar, identical to the one Chuck Berry used. Changing their musical style, and gradually progressing to fully electric guitars, the band became the "electric" Vampires then changed name to the “Dominators” after the Watkins Dominator amp and the Norton Dominator motorcycle.**

Ritchie Blackmore was insistent on having a (non guitar playing) singer. After several singer changes e.g.Tony Parsons, “Bobbie” Danks became the lead vocalist but Blackmore was not happy with a four-piece and Barry Lovegrove was drafted in.
The band secured a residency in Twickenham, supplementing this with work at weddings and youth clubs, where they’d play rock’n’roll standards such as Vince Taylor’s "Brand New Cadillac" and Shadows numbers. *** Blackmore rolled his former schoolmate, drummer Mick Underwood (later of Quatermass), replacing Clive Buckie for a short while. Underwood was fired for being too loud and joined the Satellites, teaming up with Roger Mingay.

Disappointed at failing the audition for The Savages, Ritchie Blackmore continued working at the Airport, and playing with the Dominators until they finally broke up in the Summer of 1961, before joining Mike Dee & The Jaywalkers. He was drafted in through drummer Terry Maybey who had occasionally stepped in the Dominators when neither Buckie nor Underwood were available. Blackmore went professionally and made his first ever recording - My Blue Heaven - for the Decca label with them.
"Screaming Lord" Sutch used to come and watch The Dominators play during their last months on the recommendation of Mingay.
“It was pure coincidence that two ex members of The Vampires played for Dave Sutch, plus the close proximity of all concerned…” says Bob Danks.

After the demise of the Dominators, Barry Lovegrove joined up a band called Dave Dean & The Cruisers Combo;
Terry Maybey joined James Royal & The Hawks; and Bob Danks became the vocalist of The "Four Sounds" who used to play the Station Hotel Richmond at the same time as the Rolling Stones and took over a regular slot from The Who when they became famous.


Bob Danks
*… “Our first "paying"gig was at The Kings Head in Twickenham and it was on Dec 24th 1958.”
Over time,influenced by "Rock & Roll" and becoming more proficient with our instruments we gradually progressed to fully electric guitars and drums instead of washboards for percussion. We then left skiffle behind.
**“The Vampires became the "Electric Vampires" then because Ritchie [Blackmore] had a Watkins Dominator amp. and I had a Norton Dominator motorcycle we changed the name !”
“When we first started The Dominators we had a policy of"whoever learned an instrumental first" played it on stage. As I was at work and able to buy quite a few records to learn quickly I often played lead with Ritchie [Blackmore] on rhythm,then suddenly his ability to pick up solos just took off at a tremendous rate and I just could not compete.I carried on with rhythm and vocals…
Although I did most of the vocals we were always trying new singers. Tony Parsons was one of these.He then got a job which kept him away and not able to get to every gig so he left. This became frustrating as I was still doing most of the vocals so I dropped rhythm and we got Barry Lovegrove in as rhythm,although he was very good and occasionally played lead.”
*** “…The Dominators however used to feature "Brand New Cadillac" in our set and it was always a compliment when people used to say that we did it better than Vince's Playboys. That was due to Ritchie already having started to become quite wild with his playing not my vocals !!”


Some appearances of The Vampires and The Dominators

Various Line-ups of The Vampires and The Dominators


Special thanks to Bob Danks for the photos, posters and his recollection
Publié par Musicstoryteller#15.Aline