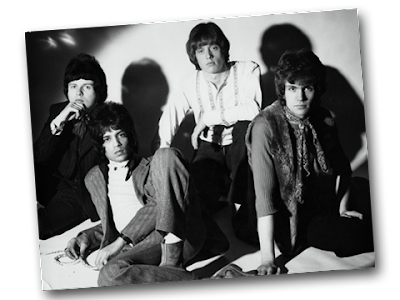 Winston Beresford Gawk or Gork aka "Winston G", was a suntanned singer with indian roots who starded out as a solo act, first under the moniker “Johnny Apollo”, in the early 60s.
Throughout the decade, he was backed by various bands: The New Premiers, The Purple Hearts and "The Wickeds", renamed "The Winston G Set"...
In late 1967, The Winston G Set transformed itself into Fox dabbled with psychedelic rock, and with a new bass player called Chris Jones (not related to the Brummie lead guitarist with The Chucks and The Way Of Life). Bobby Graham produced their release "Bye Bye Baby", issued on Decca towards the end of the year. Their stage act caused some raised eyebrows up and down the country. Their schedule took them on a tour of Europe, particurlarly in Germany where they became very popular.
"Hey! Mister Carpenter", released on the CBS label, in April 1968, was a number written by Nicky James with ex-Traffic man, Dave Mason guest-starring on sitar. It’s very poppy with a repetitive chorus and some catchy guitar. The 'B' side, "Seek And You Find" is much heavier.

Pete Beckett, formerly with The Thoughts, joined up the band as a new bass player.
Topham played his final gig with them at The “Middle Earth Show”, at the Roundhouse Chalk Farm, London, alongside The Who and The Blossom Toes, in early October 1968. He then decided to revive and further cement his long friendship with Tony ‘Duster’ Bennett. The following month, The Fox performed at the Lafayette club, in Wolverhampton with a new member: Huw Lloyd-Langton (1), a 17-year-old guitarist that Winston G met at the Giaconda Coffee Bar, Denmark Street. In late 1968, another band started using the name Fox, so they changed their name to The Whip.
They worked mainly in Germany and Holland for 6 months, playing the army bases.

Pete Becket went on to do a short stint with the band World of Oz before concentrating on his solo career and then eventually going to USA where he formed the band "Player". Original drummer Tony McKintyre also left to manage his model wife who was Miss England at the time.

In 1969, Syd Gardener became new bass player and John Lingwood the drummer. They went back to Germany and Holland for more intense fun and games, a few months. They then returned to England, and the group broke up going their own separate ways.
Winston G ended up staying in Holland.
Huw Lloyd-Langton went on to form Hawkwind with Dave Drock.
After taking a break, he relocated to Germany where he spent time in a band that featured John Lingwood. Lloyd-Langton and Lingwood then returned to the U.K. where they formed Amon Din with Dave Anderson and John Butler. John Lingwood would later beat the skins for various great acts such as Steamhammer, Brian Auger´s Oblivion Express, Manfred Mann Earth Band, The Rocky Horror Show, Roger Chapman & The Shortlist ect.


(1) Huw Lloyd-Langton
“Also whilst I was working there I used to go down to Denmark Street for lunch at the Giaconda, where all the musicians used to hang out for coffee. I was sat there one day when this very star looking person sat down beside me and asked if I was a musician, and when I said I played the guitar he asked me if I wanted a gig. I arranged a time for the following week to go for a blow. His name was Winston G., Winston Gork his real name was, and he had a band called Fox. This would be in 1966 or so. We didn't put any records out. Somebody else started using the same name in 1967 so we had to change our name to The Whip.”

“Me and another guitarist turned up for the audition. I think I got the job because of my image. The other guy was equally good if not better - I can't remember his name though. Being in the band was a complete waste of time as it turned out, but it was probably a good apprenticeship. We spent most of our time flat broke in Europe, playing the army bases. All I cared about was that I was on the road with a band. Eventually it just totally fell to pieces - Winston ended up staying in Holland and I ended up returning to my old stomping ground in Denmark street.”