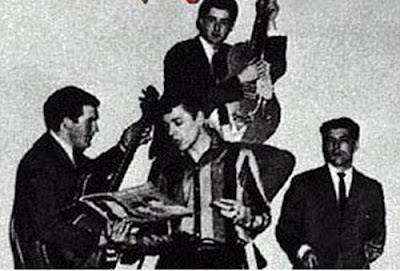 Born Christopher Tidmarsh, on 4 February 1943 in Hoxton, Neil Christian fronted his backing group the Crusaders from 1960 to 1967, before starting a solo career in Germany.
His group was a breeding ground for many great young musicians and included, at various times, among others guitarists Jimmy Page (Led Zeppelin), Paul Brett (Arthur Brown), Albert Lee (Chris Farlowe), Ritchie Blackmore (Deep Purple) and Mick Abrahams (Jethro Tull); bass players, Alex Dmchowski, Tony Dangerfield and Rick Brown; pianist Nicky Hopkins (Jeff Beck Group), and drummer Carlo Little (Rollingstones).
He had recorded Merseybeat-ish numbers, British R&B, and bloated MOR pop, but none of his 8 singles made a mark at home, except of "That's Nice" that reached #14 in 1966.

The Crusaders evolved out of a North London-based outfit called The Red-E-Lewis And The Red Cats who was managed by Chris Tidmarsh.
The previous Red-E Lewis’ backing group, The Red Caps, left him to team up with black rocker Cuddy Duddley then later emerged as the new edition of Johnny Kidd’s Pirates from July 1961 to early 1962, featuring lead guitarist Johnny Patto, bass player Johnny Spence and drummer Frank Farley.

In late 1958, Red-E Lewis recruited a new backing group called the Red “Cats” comprising guitarist Bobby Oats and drummer Jim Evans. They had played a few gigs at the Ebisham Hall in Epsom, supporting acts such as the Frederick Heath Combo who later emerged as Johnny Kidd & The Pirates. Jimmy Page was only 15 and was part of the Epsom Ballroom Support Band when Tidmarsh spotted him. At the end of the show, the young kid would come on stage and chat to the musicians and then using Bobby’s guitar played a few licks and riffs and some Chuck Berry solos.
In early 1959, John Spicer joined the band on rhythm guitar. When Oates announced that he was going to leave them to go to drama school in Easter 1959,Tidmarsh contacted Jimmy Page and invited him down to Shoreditch, where the band rehearsed in a room above a pub with a view to auditioning for the vacancy.Jimmy Page became their new lead guitarist and Spicer switched to bass. In spring 1960, Chris Tidmarsh replaced Lewis on vocals and the band took part of the coffee morning parties in London given by Ray Mackender, who was an advisor to Cliff Richard's father. Mackender introduced them to the Beat poet Royston Ellis who was searching for a band to back him on his poetry readings called “rocketry”, as a replacement for The Shadows who became so much in demand after the success of their single “Apache”.
Royston Ellis eventually did performances of rocketry just with Jimmy Page on guitar, from Late 1960 to July 1961, giving Page his first stage and TV shows. It was around this time that Royston Ellis learned about the benzedrine nose inhaler trick from Don Wood, the road manager of the Red Cats. It was a useful aid to staying awake in their all-night lives as musicians.
Now with Chris Tidmarsh as new vocalist, they reinvented themselve as “Neil Christian And The Crusaders”.
Tidmarsh changed the names of his musicians: Jimmy Page was known as “Nelson Storm” after the 18th century admiral, John Spicer as “Jumbo” and drummer Jim was nicknamed “Tornado”. The band used to cover Chuck Berry and Bo Diddley’s stuffs on stage but, in late 1960, they started recording novelties such as "The Road to Love" and "The Big Beat Drum", that were produced by the legendary Joe Meek and released on Columbia label 2 years later. Jimmy Page earned £20 per week.
Page toured with them for two years until he was forced to quit due to illness (suffering from glandular fever) and then attended Sutton Art College. Although he would later still record with Christian in the studio until 1964 ("Get a Load of This", a Merseybeat-style recording released in July ’63; instrumental “Crusading”; "I Like It", a R&B-rock).
Page's replacement was Paul Brett from the Impacs who was himself brieftly replaced by Albert Lee who also left them whilst on turn in Germany. Bassist Jumbo Spicer eventually left to be replaced by Arvid Andersen.
The Crusaders were augmented by pianist Tony Marsh who had previously been in a Wembley-based combo called the Escort alongside drummer Keith Moon and then left to join the Screaming Lord Sutch’s Savages in January 1964. Marsh introduced guitarist Ritchie Blackmore to Neil Christian, who teamed up with Andersen and Evans for a brief spell in early 1965.
In March ‘65, Blackmore rolled his mates into The Savages for 2 months. They actuallyhad defected to Screaming Lord Sutch who provided better fees than Neil Christian.So Christian pulled in an entirely new line-up, taking over a Luton group called The Hustlers featuring Mick Abrahams on guitar. By June 1965, Christian formed a new line up of The Crusaders with Mick Abrahams, drummer Carlo Little, keyboardist Graham Waller and bassist Alex Dmchowski.
While he was guitarist with the Crusaders, Mick Abrahams stood in for Screaming Lord Sutch who did exactly the same set as Neil Christian. He went on to join a band called the Goodtimers with, amongst others, bass player Dave Cakebread, keyboardist Graham Waller and saxophonist Bernie Etherington who then became the new set of Neil Christian's Crusaders for five months before joining The Toggery Five from Manchester in late 1965.
Christian disbanded the Crusaders soon after and decided to pursue on the live circuit without band.His fortunes went on the upswing after he hooked up with songwriter and producer Miki Dallon and began recording for the U.K. indie Strike Records.
He landed just one U.K. hit, the vaudevillian "That's Nice", written by Dallon, which made number 14 in mid 1966.
To promote “That’s Nice”, Neil Christian reassembled former Crusaders: Richie Blackmore, Tornado Evans, Avid Andersen and Tony Mash who returned to the fold. They took part of the Radio England’s Swingin’ 66 UK Tour in August then the “Ready Steady Foseco Beat 66” alongwith Brian Poole & The Tremeloes at the end of the year.
They toured throughout Europe, particurlarly, Germany. They had a residency in Munich where Christian recorded some tracks on Metronome label. “Two At A Time”, released in late ’66, was a big hit for Christian only in Germany where he developed a big following and went on to release material which never made it onto vinyl in the UK.

Neil Christian went back to England and recruited new musicians who formed the final incarnation of the Crusaders: Matt Smith on piano and three members of Lord Caesar Sutch & The Roman Empire, Richie Blackmore, Carlo Little and bassist Tony Dangerfield.
They were booked for a one month tour of Germany, on the back of Christian’s big German hit “Two At A Time”.
The Crusaders split up after an argument in a restaurant.
Christian released his final British 45 “You're All Things Bright And Beautiful” for Pye in 1967. He moved to Vogue for whom he recorded “My Baby's Left Me / Yakity Yak” with Richie Blackmore on guitar, Nicky Hopkins on piano, Rick Brown on bass and Carlo Little on drums, although it was not released until the following year.

Tony Dangerfield and Carlo Little went back to London while Richie Blackmore stayed in Germany and formed Mandrake Roots with Matt Smith prior to joining Deep Purple.
In summer 1967, he began a solo career though he still released records as “Neil Christian & The Crusaders.” He released some additional tracks in Germany, in the late '60s where he did better. Sadly Chris aka “Neil Christian” is deceased on 4 January 2010.


Neil Christian:“first time I saw him [Blackmore] he was playing with the Outlaws… I was introduced to him by a piano player called Tony Marsh who used to work in The Savages. Ritchie only work for people if he thought they stood a chance of success… and I said, “If you can’t make your mind up come on the gig with us have a blow, see what you think”… he said “I know a Big Star in the making when I see One”… after that I got on great with him and he joined the band. ”

Arvid Andersen
“Ritchie not only knew our repertoire but also all the instrumentals… We went on stage that night without rehearsal, in a church hall in the East End... Christian would slide on stage for a few numbers and let me carry on with a Little Richard song list plus a few stand-bys like “Skinnie Minnie”... Christian’s little side deals kept the band afloat but we did spend a good 3 months together as The Crusaders”

Mick Abrahams:“David Sutch did exactly the same set as Neil Christian hence it was easy to do it without extensive reheardsal !”
"We had to dress up in orange shirts, tight black trousers and white boots and wiggle our asses. If you saw how fat I was then you'd know why I didn't fancy it"

Neil Christian:“I just got them together to do this short tour with me. I had a record out in Germany… and we were doing all this promotional gear. We were doing some shows in Germany and live TV in Berlin… We opened a club in Berlin for teenagers - that was live TV. Did one in Hamburg… we were in this restaurant to watch it on TV… Carlo and Tony were arguing over a slice of bread…”