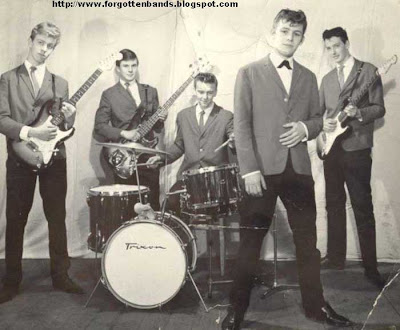 Paul Nicholas is better known for his acting career, playing the leading roles in major productions, including, Barnum, the Pirates of Penzance but also appearing in the rock-related movies 'Grease', 'Stardust', 'Tommy' and 'Lisztomania'.

Nicholas, whose proper name was Paul Beuselinck, began his career as a singer at age 15, fronting a North London based outfit called Paul & the Venoms which also included Bob Gray on guitar, Al Jarman on bass and Mike Wells on drums. They used to play Chuck Berry, Elvis Presley, Eddy Cochran, Conway Twitty and Cliff Richard's numbers such as "Move it", "20 flight Rock", "Heartbreak hotel", "I'ts only make believe"... Paul sang with the Venoms for about six months, and then replaced Gene White as new frontman of another local band called The Phantoms in mid-1960 (1).
At this stage, the line up of The Phantoms featured drummer Pete Phillipps and 2 future Tornados, bass player Ray Randall and lead guitarist Stuart Taylor.
The name change to Paul Dean & The Dreamers came at the end of the year. They thus were augmented by another guitar player Paul Hughes and Saxophonist Ashton "Toots" Tootell whose father had played with Johnny Kidd in the mid 50s. They were managed first by George Dark and later by Dave Oddie who secured them their better wages (2).

On June 25, 1962, Paul Dean & The Dreamers supported Screaming Lord Sutch & the Savages at Wembley Town Hall. That night a young Keith Moon was among several hundred who attended the show.

In fact, it was so crowded that many of the girls stood on the bench seats around the hall perimeters to see the bands properly and promptly punctured the leather with their stiletto heels, causing a mile furore that made the local papers... The Dreamers disbanded at the end of the year.

Early 1963, Paul Nicholas was brought in The Premiers to replace Ronnie Harwood who had left to front “The New Premiers”, a brand new band whose bass player was Ray Randall. Randall was later head hunted to replace Brian Gregg in the Tornados of "Telstar" worldwide fame. Nicholas and Phillipps joined briefly Jackie Lynton & The Jury.

By May 1963, "Toots" Tootell was brought into the Savages who took up a residency in Hamburg Star Club, backing Screaming Lord Sutch and and then toured North Germany on their own as "The Raving Savages" from Summer to Winter’ 63. Ronnie Harwood brought in by Tootell as a replacement for Freddie ‘Fingers’ Lee in late 1963.

Meanwhile, Screaming Lord Sutch recruited Paul Nicholas as pianist, Stuart Taylor and Pete Phillipps to become his new set of Savages until the end of the year, when Ray Randall poached Stuart Taylor in the Tornados.

So Nicholas and Phillips teamed up with Ronnie Harwood, and ex-Savages’ guitarist “Pussy” Mew to become Michael Black’s backing group. When Screaming Lord Sutch lost his crew of Savages featuring Tony Dangerfield on bass, Carlo Little and Tony Marsh on piano, after Joe Meek had signed Dangerfield as a solo artist, he would ask the members of the Michael Black’s band to take over them. They helped him out to launch his own pirate radio station "Radio Sutch" in May 1964 (3) and toured with him until early 1965, when Paul Nicholas decided to give up playing full-time in favor of studying drama and developing his acting skills and then took the opportunity to begin a career as a solo act.

In February 1965, Paul Dean & The Soul Savages comprising ex-Dreamers, Stuart Taylor and "Toots" Tootell, who had both just been elbowed from the Tornados, and drummer Pete Phillips, supported but also backed American acts Del Shannon and the Shangri Las on their UK tour. They also recorded a rendition of “You Don't Own Me” as The Thoughts (not to confuse with the Liverpool band of the same name which recorded “All Night Stand” in 1966). Nicholas reinvented himself as “Oscar”, recording novelties produced by Robert Stigwood such as “Over The Wall We Go”.

Stuart Taylor and "Toots" Tootell reunited with Paul Nicholas in The London Cast of Production Hair from 1968 to 1970, after a brief spell in the Echoes (backing Dusty Springfield).

(1) Meanwhile the Venoms replaced him by Barry Younger before becoming Dave Martin & the Martells and then Cliff Adams & the Twilights.

(3) A photo of the event was taken when Sutch's party boarded the London Tower Bridge. Paul Nicholas fell into the Thames, on that day. In fact, he was pushed in the drink by Colin Dale, one of the disc jockeys on Radio Sutch.
Colin Dale: "The photo that most newspapers use is one of the cornucopia with us all on it, Paul Nicholas stood in front of me you can just see my head, but I got him back later when I pushed him in the drink..."

Geoff Mew:
"I always believed that Paul already had an interest in acting and developing his stage craft. His Father was a famous show business Lawyer and Paul was exposed to show business at a very early age."