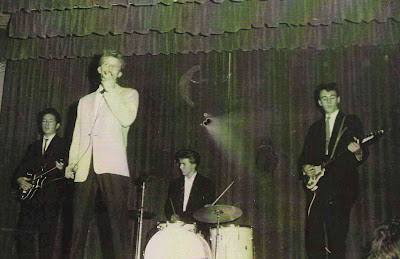 Tony Head "Dave Anthony" joined a Bournemouth-based outfit called The Furies, replacing their singer Les Fisher, in 1960. The group consisted of Al Kirtley on lead guitar (who had previously been in a band called The Stormers with Zoot Money on vocals and Andy Summers, later of the Police), John "Jet" Berryman on bass and Howard "Eddie" Parsons on drums.

Thus began Tony & the Ramrods, shortly to be renamed Dave Anthony & the Ravers. For an instrumental trio plus vocals it delivered a big, professional sound, backed up by stage movements, copied from The Shadows, with a bit of Johnny Kidd & the Pirates’ high kicking thrown in.

Reg Calvert became their new manager and put them on the road throughout Southwest England (Devon and Dorset) backing Screaming Lord Sutch as he wouldn't pay for The Savages to tour. They set sail to Exmouth after having practised a week at “The Calverts’ School of Rock’n’Roll” in Clifton Hall, near Rugby.

Al Kirtley, Guitarist of The Ravers in 1961 (later with Zoot Money):
“Reg Calvert and his wife, Dorothy, liked our band (the Ravers), and gave us progressively more work. We began occasionally backing "major" acts, such as Screaming Lord Sutch...
We did a few gigs backing "Screaming Lord" Sutch, but the only venue I can remember was the Small Sydney Hall in Weymouth, Dorset, on the south coast of England. I remember him as being a complete lunatic, but good fun and he knew more obscure facts about Chuck Berry than anyone I'd ever met.
At the time he was on a mini-tour of the South of England, and it may be that the promoter, Reg Calvert wouldn't pay for The Savages to tour, instead letting other bands on the same bill, like us, do the backing. For our set we had Tony Head (aka "Dave Anthony") on vocals and I remember Lord Sutch doing his best to disrupt Tony's singing. He was very funny.”

Dave Anthony & The Ravers were finally rewarded by Reg offering us a week’s tour of the Midlands.

In the summer of 1961, they took up residency at Bournemouth’s first cellar club, The Downstairs Club. The "Ravers" became the "Rebels" after Jet and Eddie moved away, and were replaced by Mike and Pete Giles. As 1961 dawned, Al Kirtley was approached to join a new band, this time as pianist, Zoot Money’s Big Roll Band.
The Ravers finally broke up shortly afterwards.

After Dave Anthony & The Ravers
Dave Anthony met up again the following year with Kirtley in another band called the Sands Combo. Incidentally Zoot Money supplemented Dave as second vocalist of the band. The Sands Combo split up due to a dispute over pay some months later.

By 1964, Dave Anthony replaced vocalist Reg Matthews aka "Tony Matthews" in a band called The League of Gentlemen, whose lead guitarist was Robert Fripp and who had a residency at the Majestic Hotel in Bournemouth. Robert Fripp eventually left to be replaced by Terry Squires. Fripp would later become successful with King Crimson alongside Mike and Pete Giles.

In mid 1965, Dave Anthony put a band together called Dave Antony’s Moods with the members of a group called The Trackmarks (featuring drummer Lee Kerslake): Tim Large on guitar, Bill Jacobs on bass, Bob Michaels on keyboards, supplemented by Pete Sweet on tenor sax, Graham Livemore on trombone, Andy Kirk on trumpet and John Devekey on drums. Saxplayer Pete Sweet was later replaced by Bob Downes who was formerly with The John Barry Seven and Julian Covey & The Machine. They backed female singer Goldie (from The Gingerbreads) at The Marquee in early 1966 then eventually relocated to Italy in 1967 where they cut singles for Joker records including a cover of the Procol Harum classic “A Whiter Shade Of Pale.”

By 1968, Dave Anthony started a solo career and released “Race With The Wind” on Mercury.

Tony Head sadly passed away for an heart attack on October 1, 2006
Discography

A message from Andy Sweet about his brother Pete
After being on the R&B scene with Dave Anthonys Moods he returned to freelance work, becoming highly regarded on the modern jazz scene around the Bournemouth area. He stopped playing due to ill health in 1990 and died in 2001.