Screaming Lord Sutch & The Savages in the 60’s 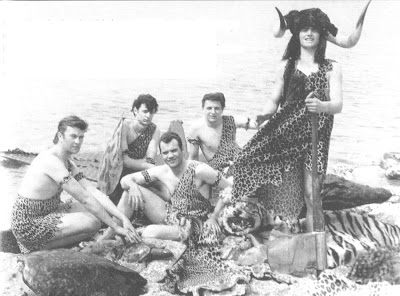 Screaming Lord Sutch (1940-1999) was one of the most eccentric British pop star: the first of the longhairs a freak years before the hippies and the heavy metal singers came along. His band, The Savages had been a breeding ground for many great young musicians such as Nicky Hopkins, Freddie Fingers Lee, Paul Nicholas, Ritchie Blackmore, Nick Simper (both of Deep Purple), Jimmy Page (Led Zeppelin), Jeff Beck, Adrian Gurvitz (Gun), Danny McCulloch and many more. Although he was basically a Britain’s Answer to American "Screaming Jay Hawkins", starting his shows by coming out of big coffins and entertaining his audience with a repertory of horror songs, he was himself emulated by some of his contemporaries: e.g. Karl & The Vampires, Count Lindsay the 3rd & The Skeletons, Frankestein & The Monsters, The Mersey Monsters or the french rocker "Hector The Chopin of Twist". He would eventually inspire more well known acts such as Arthur Brown, Alice Cooper and Marilyn Manson among others. He was also one of the UK's longest serving political leader since 1963. He released about 20 singles and 4 original albums in Britain from 1961 to 1994 but never achieved a hit. His most well known song was his tribute to “Jack The Ripper”, the guy with a big bag and black top hat.

They were the set of Savages that backed him on the recording session of "One Eyed Flying Purple People Eater" (5) - with Nicky Hopkins on piano - and during a German TV Show called "Die Drehscheibe", filmed at Kiel Star Palast and aired on ZDF in January 1966, that almost turned into a riot as their roadie Bazz Ward recalls (4).

They also accompanied Dave Sutch during a 3 date trial package tour with 5 acts including The Who, The Fortunes and The Merseys, over a week end in February, starting at the Astoria Finsbury Park, London, and ending up at Liverpool Empire (3).
Wilkie was formerly lead vocalist of the Seniors, the first liverpuldian band who went to Hamburg and eventually paved the way for the Beatles and all the other Mersey Sound Bands.
Sutch made him dress up as a woman for one part of the act so he could chase him around the club with an axe. Derry did it as a good sport for a while but he didn't really enjoy having to but the pay was good and they all needed the money.

Soon after the departure of Noel McManus, the Savages were approached by heavy-weight boxer Freddy Mac to form a larger "Soul" stage show which included American vocalists Cleo Sylvester and Ronald Bertram Greaves aka "Sonny Child".

As a result, the whole band - Phil Kenzie, Derek Bond, Ernie Hayes and roadie Bazz Ward and Billy Adamson ended up involved with this project and left Dave Sutch.
Not only that, when Screaming Lord Sutch decided to run for Parliament against Harold Wilson, who was the Liverpool candidate - as they were from that area - they decided not to continue.
Fortunately Ronnie Harwood (wafter their stint with Winston G & The Wicked) and Pete Phillipps reunited with Sutch and backed him during some gigs in France and a tour of Italy in July 1966.
Meanwhile Carlo Little had joined an Irish showband called Chris Lamb and the Universals that evolved, firstly, into the Circles, recording “Take your Time” on Island records produced by Guy Stevens, then into the new Savages during Summer’ 66. The lead guitarist of the band Bill Parkinson presented some original material of his own such as "Lost Soul" and it would eventually become one of their opening numbers. Later Deep Purple covered it on their first LP as “Mandrake Root”.

Tony Dangerfield, Tony Marsh and Ritchie Blackmore returned to the Savages during 1966.
As 1966 drew to close, Dave Sutch reinvented himself as “Lord Caesar Sutch & the Roman Empire” and the members of his band, featuring among other both Blackmore and Dangerfield, were required to dress as Roman Gladiators even during winter in Sweden where they toured. As a result, Sutch’s continuing desire for ridiculous group images was losing favour with these 2 musicians who finally defected to Neil Christian in April. Dangerfield eventually rejoined the Savages, having recruited a young Adrian Gurvitz (who would later become successful with Gun) on guitar. But this new crew left Sutch once again to back singers Billie Davis and Crispian St Peters then emerged as “Rupert People” in June 1967.
By Summer 1967, Lord Sutch was brieftly backed by a trio consisting of Carlo Little, guitarist Ged Peck and another founding member of Deep Purple, bassist Nick Simper. They all three came from the Billie Davis back up band (The Quality), and then they were hired for playing as the live band for The Flowerpot Men in October 1967.

From late 1967 to early 1968, the eccenctric "Lord" toured Holland & Germany
with a new band called "The Beautiful Quality", consisting in 2 former Wheels, Herbie Armstrong on guitar and Rod Demick on bass, plus drummer Spud Davies. After the tour, Demick & Armstrong left and carried on as a duo (The James Brothers).
So Dave Sutch decided to leave Britain and spent the rest of the decade in America where he would eventually record his debut album that was released only in 1970 and on which he was backed by many of his former Savages acting as “His Heavy Friends”.

An interesting compilation untitled "Screaming Lord Sutch Story" covered most of the singles he released from 1961 to 1966.
Check out a more complete site about their story here.

(2) After a gig at the Olympia, Paris, Ronnie Harwood was asked by a french promotor to form a new line up and he booked them for a week in Rouen, France.

(3) These concerts were organised by The Who's managers, Chris Stamp and Kit Lambert, and promoted by Robert Stigwood, with a view to a future 4-5 week tour...

In those days, the Lord's Day Observence Society BANNED stage props on a Sunday, which rather screwed Screaming Lord Sutch's act. When he tried to use props at Liverpool Empire, they dropped the curtain on him, so he started swinging on it. Caused a small riot with the theatre blokes trying to get him off.


DISCOGRAPHY
British Singles
(4) One Eyed Flying Purple People Eater / You Don't Care (Hep House HS04) was released only in Germany in 1966 but it became Screaming Lord Sutch's best seller there.

Does anybody know the line-ups of the Savages from June 1965 to June 1966?
Please contact us: tomusicstorytellers@gmail.com