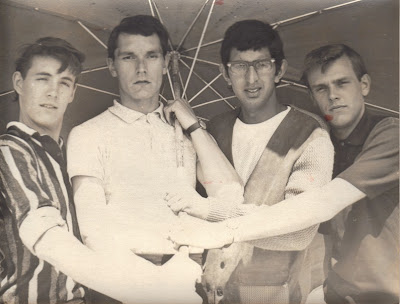 “Buddy Britton”, “Britten” or “Britain” was a very fickle artist: first performing as a Buddy Holly tribute like Keith Kelly, then reinventing himself as “Simon Raven Cult” in the mid 60’s. He started fronting his own Rock’n’Roll trio then was backed by a London-based R & B group called the Regents. Like The Screaming Lord Sutch’s Savages and The Neil Christian’s Crusaders, his groups were a real breeding ground for many great young musicians such as bass players Johnny Vance (Vince Taylor) and Nick Simper of Deep Purple.
From 1962 to 1966, Gloverwright and his various backing bands released ten singles but none of them made a mark in Britain.

Buddy Britten was born Geoffrey Gloverwright in Liverpool, circa 1943 and actually started out as musician for rocker Vince Taylor who worked for the Calverts, in Southampton, during the second part of 1959. He was lead guitarist in Taylor’s band, The Playboys alongside guitarist Brian Marshall, bass player John Cobb aka “Johnny Vance”, and drummer Johnny Watson from mid 1959 to early 1960.
The other members of the Playboys started backing him in late 1959 and then formed The first incarnation of The “Buddy Britton Trio” that opened the teenage package show headlining Vince Taylor throughout South England.
He wore the same pair of glasses as Buddy Holly, he imitated his voice and his guitar style.

In January 1960, Brian Marshall, Johnny Vance and Johnny Watson moved to London with Vince Taylor, leaving “Buddy Britton” to carry on working for Reg Calvert with a new backing band, The Southampton-based Strollers featuring Colin Willsher on double bass and Tony Burnette on drums. Willsher and Burnette eventually defected to Dave DaCosta, and Gloverwright then recruited a new edition of the band that became the first version of his Regents: with bass player Peter Mist and Barney Peacock. They were then managed by Dorothy Calvert, Reg Calvert’s wife.
Geoff Gloverwright started recording as “Buddy Britten” for Piccadilly records he then switched to Decca.
In 1963, “Buddy Britten & The Regents” released their versions of 2 R&B numbers, “If You Gotta Make A Fool Of Somebody” and Barrett-Strong’s “Money” on Oriole label. The Beatles used to cover these 2 songs on stage at the Cavern Club and Gloverwright was in the audience. Their releases coincided with the versions by Freddie & The Dreamers in Summer’ 63 and Bern Elliot and The Fenmen at the end of the year.
2 years later the same thing happened with She's About A Mover, a US hit for Sir Douglas Quintet and they lost out to James Royal and The Hawks.
When “Buddy Britten” worked for the Calverts at Clifton Hall from 1962 to 1964, his Regents included bass player Peter Clarke and drummer Brian Hire. Keith Moon was brought in as a replacement for Hire but finally defected to The Who in May 1964. Drummers Carlo Little, Roger Pinah then Paul Tait, bass players John Lawson and Nick Simper passed through their ranks during the second part of 1964. By this time, the band became a quartet by adding Tony Lost then Ray Soaper on keyboards. They were now managed by the Malcolm Rose agency, in central London, but gigs were not as plentiful as before and they eventually parted company in early 1965.
Gloverwright reassembled the Regents in April 1965 for a Jersey Season. The name change to “Simon Raven Cult”, after the best selling author, came during Summer’ 65. They only recorded one single, covering the Marty Wilde’s hit “Sea Of Love” coupled with “I Wonder If She Remembers Me” for Piccadilly. Nick Simper left in late ’65 to be replaced by a player called Brad.
Simper and Pinah were brought in the last incarnation of The Johnny Kidd’s Pirates by organist Ray Soaper from May to October 1966. Meanwhile Geoff Gloverwright relocated back to Jersey till the end of the following decade, although the name has been changed slightly to Simon Raverne…


Brian Marshall
About mid 1959, I was singing and playing with THE STROLLERS in Portsmouth, and we were contacted by Reg Calvert and asked if we would like to back Vince as his band had just split.
Myself and Dave Cobb (Johnny Vance) agreed so we moved to Southampton and met with Johnny Watson , BuddyBritton and Vince and that was the new PLAYBOYS line up. We played mostly one nighters around England as a TEENAGE PACKAGE SHOW. Buddy opened the show as The Buddy Britton Trio, with Johnny Vance and Johnny Watson, I came on as “Tony Trent” and then Vince Taylor would close the show with us all playing with Buddy on lead guitar.
After 5 months Vince wanted to move back to London so we went with him leaving Buddy
to carry on working for Reg.

Colin Willsher
In the early years, Buddy Britten used to go out as the Buddy Britten Trio, a Buddy Holly like tribute and when he was working for the "Calverts". I used to double on bass for him on many concerts with Tony Burnette on drums to make up the trio. That’s what you got to do on a Calvert package show!
We worked together until about 1960 and then went on to different bands,I went with Dave DaCosta on bass to France ,firstly working the US army bases…

Carlo Little about a gig at The Rink Ballroom, Swaddlingcoat.
"After the gig, we didn't have anywhere to stay so the promoter said we could sleep in the ballroom for the night. He locked us in and we tried to get comfy on the floor. It was so uncomfortable that someone got up, found a bingo machine and we had a great laugh playing bingo at three in the morning!”


Nick Simper
"...we had a long chat with Keith Moon, who it transpired had passed an audition for the Regents, but received an offer from the Who just two days after accepting the job with Buddy...

By late 1964, I received a telephone call from Jim Marshall's son, Terry. He asked if I was interested in a professional gig...with Buddy Britten and the Regents.
The following evening, I witnessed the Regents' show at the Grosvenor Ballroom in the centre of Aylesbury.
Roger Pinah had blossomed into one of the most visual and exciting drummers that I had ever seen, with Buddy Britten playing raw guitar behind his rocking vocals, Tony Richards pumping the electric piano, and about-to-leave bassist John Lawson providing the bottom end. After the show I met Buddy. Tall, charming and well-spoken, he made me welcome and showed me the set-list, mostly songs which I knew...


Buddy welcomed me to the office (of the Malcolm Rose agency, which managed his career), where he presented me with a stack of his single record releases, which I was instructed to learn for my debut gig at the weekend.
Saturday night arrived, and together with Buddy, Roger and Tony Richards on piano, I made my professional debut at the Whitehall, East Grinstead in Sussex.
Tony Richards dropped out as he had a demanding daytime job, and Roger scoured the music press adverts for likely candidates. Our first port of call was Putney, where we found a really talented pianist called Ray Soaper...

Buddy liked to vary the set by including the odd folk ballad, and as we lurched through a shaky rendition of “Jailer Bring Me Water”, a bunch of hairy biker types near the front began to hurl abuse...
As 1965 dawned, so the cracks began to appear.
I suspect that Buddy was also having management problems, as gigs were not as plentiful as before, meaning a loss of income! Roger and Ray immediately solved this problem by joining a local R&B outfit called ‘Cyrano and The Bergeracs’, who had a pretty full worksheet.
With just myself left with Buddy, I began to find myself picking up different drummers for gigs, who were called in to deputise. Where possible I would suggest my old Delta 5 drummer, Paul Tait, so that the rhythm section at least had some rapport...

…However, before Solly even got to rehearse with the Ivy League, our old boss Buddy Britten re-appeared with an offer that neither of us could resist. Early April 1965 saw Solly an myself caught the ferry to Jersey.
Reunited with pianist Tony Richards and Buddy's brother Nigel on tambourine, we swiftly recorded the four songs for Pye records with producer John Schroeder in charge.
After the Jersey trip was over, the name Buddy Britten and the Regents would be no more, he solemnly informed us. He was to become Simon Raven (also the name of a best selling author) and the band members would also have new identities. Solly was to be called Roger Truth, Tony Richards would be christened Richard Honour, and I was to be known as Kid Freedom! Collectively we would be known as the Simon Raven Cult.
The suits were to be dispensed with, dress would be pop art style and the music would be louder and more aggressive.
We also knew that six months of playing together nightly had melded us into a useful rhythm section, ready to take on the world! I was swiftly replaced by an excellent player called Brad, who played on the 'B' side of the new single, a pretty good cover of the old Marty Wilde hit, "Sea of Love".
Geoff continued to play at the Van Gogh for a few years... I played with him once more, deputising for his regular bassist on July 8th 1967, just before he relocated back to Jersey…"

Alan James "I played bass for the Simon Raverne Trio 1968-1969.
We toured Europe doing us bases ect. and was resident band at Les Arches in Jersey.
I have very fond menories of that time.
Simon showed me how to be not only a musician but how to be a showman. He's influence still
helps me run a good show. And i thank him for the lessons he gave me...

Martin Samuel "I knew and played drums with Geoffrey Glover-Wright for 3 years when he was Simon Raverne in Jersey, CI and Dubai, UAE.
We stayed at Les Arches Hotel, Gorey where we rehearsed and played each winter... During the summers, we played at The Cabin in The Watersplash on Five Mile Road, St. Ouen's...
We were contracted to play for 6 months at The Sahara, Dubai, but after 3 months, Geoff quit to manage The Safari club.
Simon Raverne's material consisted of old rock 'n' roll (Buddy Holly, Chuck Berry, Jerry Lee Lewis, Elvis Presley), Johnny Cash and Neil Diamond. Between gigs with Geoff (as Simon Raverne's band), Richard, Taffy and I played as 'Cigarette and Burning Boots' at The Deep, St. Helier...
We had to wear black suits and bow-ties and would open the show as a trio. Taffy would sing whatever were current hits (Eagles).
One night, just for the fun of it, Taffy and I were dressed in 'drag' by our girlfriends and went on stage without telling Geoff.
Normally, he would not look at us ~ just step up on stage and start playing but when he finally noticed us, he said nothing at all."