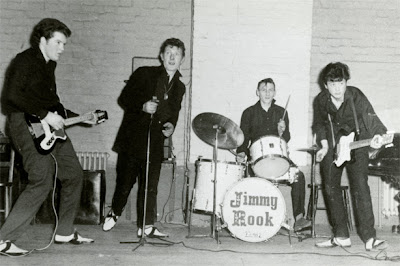 Red-E-Lewis And The Redcaps were a semi-professional rock 'n' roll band from North London, moulded on American Gene Vincent And The Blue Caps. Fronted by singer William Stubbs aka “Reddy Lewis”, they were formed in mid 1958 and their first line-up consisted of  guitarist Bobby Oats and drummer Jimmy Rook. The Redcaps were "discovered" at the same Wandsworth Town Hall once frequented by Frederick Heath & his Combo who later emerged as Johnny Kidd & The Pirates.


They had played a few gigs at the Ebisham Hall in Epsom and Jimmy Page would chat to the musicians and using Bobby’s guitar played a few licks and riffs and some Chuck Berry solos.
In early 1959, John “Jumbo” Spicer joined the band on rhythm guitar.When Oates announced that he was going to leave them to go to drama school in Easter 1959,The Redcaps’ manager, Chris Tidmarsh, contacted Jimmy Page and invited him down to Shoreditch, where the band rehearsed in a room above a pub with a view to auditioning for the vacancy.Jimmy Page became their new lead guitarist and Jumbo Spicer switched to bass. In spring 1960, Chris Tidmarsh replaced Lewis on vocals and the band took part of the coffee morning parties in London given by Ray Mackender, who was an advisor to Cliff Richard's father and eventually discovered and became the manager of Mark Wynter. Mackender introduced them to the Beat poet Royston Ellis who was searching for a band to back him on his poetry readings called “rocketry”, as a replacement for The Shadows who became so much in demand after the success of their single “Apache”.
Royston Ellis eventually did performances of rocketry just with Jimmy Page on guitar, from Late 1960 to July 1961, giving Page his first stage and TV shows. It was around this time that Royston Ellis learned about the benzedrine nose inhaler trick from Don Wood, the road manager of the Red Cats. It was a useful aid to staying awake in their all-night lives as musicians. He eventually showed (not fab’) four young lads from Liverpool how to use the nasal inhaler. They were musicians in an unknown outfit that backed Ellis when he performed his rock and roll poetry in Liverpool and finally took his advice on modifying the spelling of their band name…
Now with Chris Tidmarsh as new vocalist, they reinvented themselve as “Neil Christian And The Crusaders”.

Reddy Lewis recruited a new backing group comprising Johnny Patto on guitar, Johnny Spence on bass, Frank Farley on drums. Spence and Farley were previously with the Wayfaring Strangers and The Ramrods alongside guitarist Mick Green, 2 skiffle groups from Wimbledon.
The Redcaps, supplemented by Vic Cooper on Keyboards, provided backing services for Cuddly Dudley, the UK's first black rock 'n' roller who was managed by Guy Robinson, replacing the all-black combo “The Embraceable Four”. Dudley had just left HMV and signed to Ember Records. Cuddly Dudley only recorded one single with The Redcaps, "Sitting in A Train" coupled with "One That I Like", released in 1961, but it failed.
They were joined on stage by Reddy Lewis during some gigs at Tamworth Assembly Rooms (Teen Beat), in May 1961.
In Summer 1961, Johnny Patto, Johnny Spence and Frank Farley splintered away and teamed up with Johnny Kidd who was also managed by Guy Robinson, to become the core of his “New Pirates”. In fact, when Kidd was left high and dry by his then Pirates, the "power trio" - Alan Caddy on guitar, Brian Gregg on bass, Clem Cattini on drums - his mates Nero & the Gladiators recommended the Redcaps who were great fan of his: when he played at Kingston Granada, some months earlier, Green, Spence and Farley plus Jimmy Page sneaked in for free to watch him. Patto quickly left, to be replaced by ex-Ramrod Mick Green in early 1962. Keyboardist Vic Cooper later joined them for the "Lost Album sessions” in Spring 1964.

The Walsall-based Redcaps, fronted by singer Dave Walker, were a seperate band who had recorded some R’n’B and Blue Beat numbers for Decca records on which Jimmy Page also played between 1963 and 1965.


John Spicer aka "Jumbo Spicer"“In early 1959, I joined a North London combo called Red-E-Lewis And The Redcats. I played rhythm guitar, and another guitar player called Bobby Oats took care of lead. In Easter 1959, Oates announced that he was going to leave the band to go to drama school, and so the band turned their attention to finding someone else.
It was during the ensuing conversations about a replacement that I first heard the name Jimmy (the kid from Epsom) first mentioned. In the months before I joined, The Redcats had played a few gigs at the Ebisham Hall in Epsom. After these gigs, Jimmy would chat to the band and using Bobby'’s guitar played a few licks and riffs and some Chuck Berry solos.”

Royston Ellis
“He [Jimmy Page] had just started playing in the group managed by Chris Tidmarsh (Neil Christian).
I met Jimmy through Chris who was at one of the coffee morning parties in London given by Ray Mackender, who was an advisor to Cliff Richard's father and eventually discovered and became the manager of Mark Wynter.”

“… in the issue of the English music weekly, Record & Show Mirror, dated 16 July 1960, there is a letter from me referring to the London group I was using for backing when I performed my poetry as "The Red Cats".

“I learned about the benzedrine nose inhaler trick from the road manager (Don Wood) of the Red Cats then managed by Chris Tidmarsh. Jimmy was the guitarist with the group.”


Various Line-ups of The Redcaps