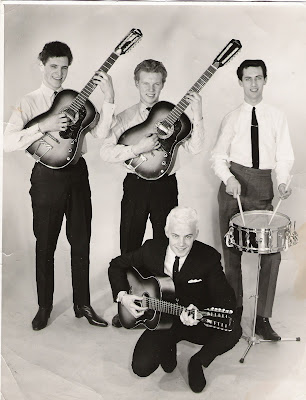 The Saints were put together and named by Joe Meek who used them on many of his recordings.
This instrumental trio consisted of Roy Philips on guitar, born in Parkstone, Dorset on 5 May 1943, Tab Martin on bass, born Alan Brearley, in Newcastle on Christmas Eve 1944, and drummer Ricky Winters born 27 September 1940, in Aldershot, Hampshire.

Roy Philips was the guitarist in a Bournemouth group who as The Soundtracks (originally called The Drovers) acted as back up band for Everly Brothers influenced duo The Dowland Brothers.

Tab Martin was the official replacement for Heinz Burt in the Tornados but he only stayed with them from January to March 1963. At the time Heinz was leaving the band to become a solo artist and was due to star in the film ‘Farewell Performance’. As the Tornados were also due to appear in the film playing the song ‘The Ice Cream Man’ a new bass player was needed at short notice, and Tab was selected by Joe Meek for this appearance.
That was his father who answered of the ad... Tab had never played the instrument before.

Ricky Winters was the drummer in another act produced by Joe Meek: Cliff Bennett & The Rebel Rousers from 1959 to 1961.

In Spring '63, Joe Meek persuaded Roy Phillips to leave The Soundtracks to work with Tab Martin and Ricky Winters, and together they formed The Saints originally as the backing group for Andy Cavall.
Andy Cavall & The Saints supported Jerry Lee Lewis and Gene Vincent during their British Tour from May 6th to June 2nd 1963.
During that Tour, The Outlaws backed Heinz but they were requiered to back Jerry Lee Lewis and Gene Vincent on the continent till the end of the summer season.
The Saints became the new backing group for Heinz on a series of package and variety shows while The Outlaws only supported him on his discs ("Just like Eddie", Decca records).

The Saints released a couple of singles in their own right on the Pye label in 1963. They covered Surfaris' hit "Wipe Out" on their debut single.

A single was issued only in the US under the name of The Ambassadors, Surfin’John Brown (Dot records) presumably in an attempt to cash in on the then surfing craze. Two further tracks ‘Happy Talk’ and ‘Parade of Tin Soldiers’ have since appeared on Joe Meek reissue compilations.

In February 1964, Heinz & the Saints took part of a Larry Parnes package tour alongwith Johnny Kidd & the Pirates and Joe Brown & his Bruvvers, then supported the Rollingstones during their 3rd British tour the following month.
When Heinz moved to EMI Columbia, in April 1964, he used a new backing band,The Wild Ones, and The Saints called it a day.
Shortly afterwards Tab Martin and Roy Phillips teamed up with drummer Trevor Morais (formerly with Faron's Flamingoes, Rory Storm and the Hurricanes, and Ian Crawford & the Boomerangs) and together they formed The Song Peddlers.

Ricky Winters later played drums with Screaming Lord Sutch & The Savages in the 70’s. He now leads the current Saints.

When Heinz moved to EMI Columbia, in April 1964, he used a new backing band,The Wild Ones, again with Ritchie Blackmore on lead guitar.