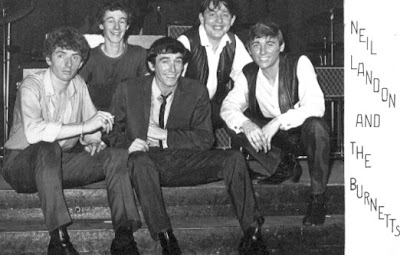 Photo of Neil Landon & The Burnettes in Germany, Mid 1965, courtesy Kevin Lang Left to right: Kevin Lang, Noel Redding, Neil Landon, Alan Dickenson and Pete Kircher.
The Burnettes were a Folkestone-based group fronted by singer Neil Landon, who enjoyed fleeting fame as a member of The Flowerpot Men with Carter-Lewis’ "Let's Go To San Francisco" in 1967. The band also featured other British luminaries such as drummer Pete Kircher aka “Pete Carter” later of Honeybus and Status Quo during the 80s, bass player Jim Leverton later of Savoy Brown, now with Caravan, and above all Noel Redding, the third man in the Jimi Hendrix Experience.


Neil Landon was born Patrick Cahill in Kirdford, Sussex, England, on July 26th 1941.
He had worked as a ship's carpenter then started singing in a semi-professional The 'Rolling Stones' from Dover (no connection with the later famous band of the same name) in October 1960 before fronting another kentish outfit the 'Cheetahs' from Ashford under the name of "Pat Barlow" from 1961 to 1962. They performormed a rendition of “Somewhere Over the Rainbow” on Southern Televisions talent show ‘Home Grown’ in early 1962.
In summer 1962, he was singing in London with The Thunderbolts and first teamed up with Noel Redding, who was then lead guitarist in another Folkestone-based group called The Lonely Ones.

By September 1962, adopting the name “Neil Landon”, he and the remaining Cheetah Mick Allen joined Folkestone band The Lonely Ones who eventually became “The Burnettes” as they were offered some prototype Burns Bison guitars after visiting the Burns guitar factory.
Mick Allen, who was originally intended as guitarist of the band along with Noel Redding, recalls: “The band was formed about September 1962 when Pat Cahill from 'Pat and The Cheetahs' joined with Noel Redding, Pete Kircher and Bob Hiscocks from 'The Lonely One's.' I also played a few gigs with them at the start but didn't want to give up the day job at that time to travel with the band!
The band went under the 'Lonely One's' name at first. Then when, they visited the Burns guitar factory and came away with new prototype Burns Bison guitars and changed the name of the band to the 'Burnettes.' I believe they did some form of a deal getting the guitars cheap for using the name!”

The first gig was at the American Airforce Base at West Malling in Kent. The band was going down very well during the gig and they were well supplied with cans of ‘Heineken’ beer. After the second gig, Mick Allen and original bass player of The Lonely Ones John Andrews, who were both in apprenticeships, decided to leave the band. They went on to join Pat Barry & The Travellers and Bob Hiscocks switched from Rhythm Guitar to bass.

In April 1963, Mick Allen joined the band on guitar as a replacement for Noel Redding who put a new set of Lonely Ones together.
Mick remembers that he first joined them not as a permanent member: “The band started working for Jack Fallon's 'Cana Variety Agency' and getting gigs all over England until about April 1963 when Noel Redding decided to leave. I was asked to help out at a gig at Swindon. I was originally just doing a few gigs until the band had replaced Noel. However they talked me into staying.”

After the departure of Bob Hiscocks who also joined up The Daltons, The Burnettes worked the remainder of the year without a bass player, and carried on with keyboardist Mel Simpson from London playing the bass riffs on the organ pedals.

During this period, they toured around England and Scotland, supporting acts such as The Searchers, The Barron Knights and The Rolling Stones who used their amps! To move with the times, and like so many British bands in the wake of the Beatles, the group moved to Germany where they acquired considerable musical refinement in the course of engagements lasting weeks and even months in Frankfurt, Cologne and Duisburg clubs.

In January 1964, they were booked to play the Storyville Club in Frankfurt, near to the American base… and finally enlisted a fifth member: Kevin Lang from Manchester on bass.

Mick Allen:
“The owner of the club, Jon Marshall, insisted we had five in the band, so being as we were playing for a couple of weeks in the Manchester area, we auditioned and enlisted the very capable Kevin Lang on bass. Incidentally, Kevin’s brother Bob was the bass player with Wayne Fontana and the Mindbenders.”

This stay in Frankfurt had been a rigorous apprenticeship in spite of unsanitary living conditions.
“I remember when we played the Storyville in Frankfurt from 1st February to 31st March 1964 that we stayed in The Hotel City. This was about 200 metres from the Storyville. The Hotel was a typical 'English band' dump! Myself and Neil were in a ground floor room that looked as if it was converted from a storeroom. The room had no heating and we had the same sheets on the beds for the whole two months we were there. This didn't matter because we would just collapse into bed exhausted after the long hours!… We played from 20.00 to 01.00 every day excepting Saturday when we had to play until 03.00... We also had to play a 2 hour matinee in the afternoon on Saturdays and Sundays.”

“Our music in early 1964 was a mixture of some of the late 50's Rock'nRoll, perhaps the odd Cliff Richard song, lots of Beatles type stuff and some R&B. By 1964, if you were up to date you were incorporating a Hammond organ into the band and getting into the R&B music such as played by Georgie Fame!”

Neil Landon & The Burnettes released no record during the 60s however they made some recordings that later appeared on a LP called “Neil Landon and The Burnetts live at The Storyville, Koln in 1964.” This record compiled, in fact, various recordings the band made since their first trip to Germany.

“There are 9 songs we recorded [at a studio] in Frankfurt in 1964 as a demo for Marshall Chess of Chess records in Chicago who came to see us at the Storyville club. He had wanted us to record a cover of 'High Heeled Sneakers', however, we were so popular at the Storyville that the boss man asked us to stay for another month! Consequently, by the time we returned to London Chess Records had released the original version of 'High Heeled Sneakers' by American singer, Tommy Tucker.
There is also a recording that was made at the Storyville Club in Cologne and recorded by a member of the audience in June 1964. The song is 'Bye Bye Johnny' and was sung by Pete Kircher the drummer.”

At the end of June 64, Mel Simpson decided to stay in Germany with a beautiful blonde called Elka from Frankfurt, and joined a German band but without the Hammond organ because it was still being paid for by The Burnettes!

When the band returned to the UK, they tried another organist who only played with them at The Hous Da Musika in Wuppertal for the last two weeks of July 64, but he wasn't up to the standard required and eventually the Hammond was sold and they reverted to a four piece band.

At the end of August 1964, Mick Allen, who'd had enough travelling about, announced he was leaving the Burnettes and Noel Redding returned on guitar. Mick later formed a Kentish outfit called The 'Shades of Black'. Among the first gigs of his new group was a jam session with Neil Landon & The Burnettes at the Hillside Club in Folkestone in April 1965. Incidentally, the Hillside Club was the venue of another jam session on 31st December 1966. The band that new year’s eve was Folkestone band ’The Circuit’. Jamming with them was Noel Redding and none other than Jimi Hendrix!

By May 1965, the band returned to the Storyville in Germany and they enlisted a new keyboard player Alan Dickenson for a short while. There was a bit of disagreement within the band about the scale of their pay while in Marburg and Dickenson was the first to leave followed shortly by Kevin Lang and Pete Kircher in late July.
At the end of Summer 1965, they were respectively replaced by Norman Hale, Jim Leverton, and Eric Dillon. Leverton was formerly bass player with the 'Big Beats' from nearby Dover. Hale was the original organist with The Tornados, and Dillon had previously been in Chris Sandford & The Coronets alongside him.
Incidentally, Eric Dillon had been enlisted in The Coronets as a replacement for another very young drummer: Mitch Mitchel who is also rumoured to have been brought in The Burnettes.
Alan Dickenson would later play on Dave Carlsen’s “Death On A Pale Horse” in January 1973, alongwith Noel Redding and Keith Moon.

Neil Landon and his new set of Burnettes went back to Germany for another month, supporting the Mersey beats. Tom Jones, who was also touring there after landing his first hit. 'Its not unusual', even had to share a flat with some of them! However as Eric Dillon was under age, Pete Kircher eventually returned to the fold. But shortly thereafter, Neil Landon decided to pursue a solo career and the band split up.

In late 1965, Noel Redding, Jim Leverton and Pete Kircher teamed up with singer Derek Knight to become the core of The New Lonely Ones briefly before deciding to call themselves The “Loving Kind.”

Meanwhile Neil Landon recorded an album with Sheila Boddicott aka “Sheila Deni”, female vocalist of the Black Diamonds from Midlands, then got to know the songwriting/producing team of Carter–Lewis, who helped him out to launch his debut single for Decca records, before joining the Ivy League which would become The Flowerpot Men.

Prior to joining the Jimi Hendrix Experience, Noel Redding teamed up with the Folkestone-based Concords who backed him for a tour of the north as the new Burnettes.

When Noel Redding decided to leave the Jimi Hendrix Experience by 1969, he embarked on a solo project that reassembled with his old friends: Neil Landon on vocals, Jim Leverton on bass and Eric Dillon on drums. During sessions at the Olympic Studios they agreed to expand the project into a group: 'Fat Mattress'. The band toured the US as warm-up for the 'Jimi Hendrix Experience'...

Then, in October 1970, Landon & Redding formed 'Brain Police', a band that reassembled with keyboardist Norman Hale. Incidentally, Norman Hale and Kevin Lang had both auditioned with Jimi Hendrix in the early days.

The Burnettes Without Neil Landon